India   All India  23 Jul 2020  Rajnath asks IAF to be ready for any eventuality
India, All India

Rajnath asks IAF to be ready for any eventuality 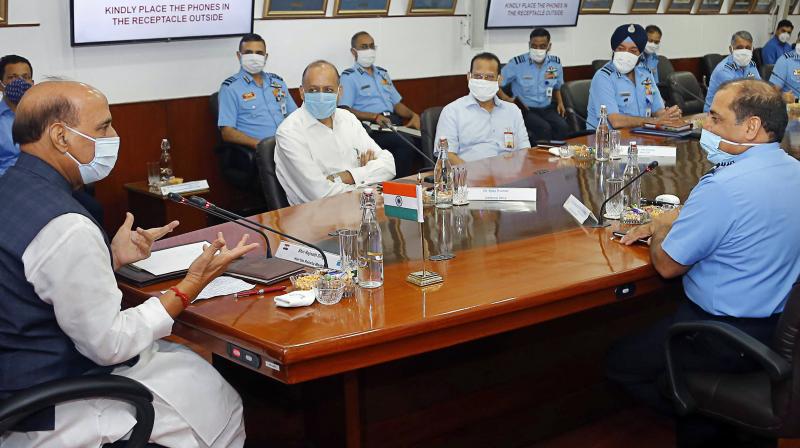 With the India-China talks on the Ladakh standoff hitting a dead end as of now, defence minister Rajnath Singh told top Air Force commanders on Wednesday “to stand ready to handle any eventuality”.

There has been no further progress in the disengagement in Ladakh after the corps commanders’ meeting on July 14 at Pangong Tso, Hot Springs and the Depsang plains. India wants China to restore the status quo of April 2020 at the LAC.

The Chinese have not vacated Finger 5 in Pangong Tso and continue to hold the ridges in Finger 4 area. In the initial phase of disengagement, Chinese troops had vacated the banks of Pangong Tso lake in Finger 4 on July 9 and gone back to Finger 5. But they still have to vacate the area between Finger 5 and Finger 8, that India claims is its territory. In May, Chinese troops had occupied the area between Finger 4 to Finger 8 and prevented Indian troops from patrolling. In Hot Springs area, Chinese troops have reportedly not moved back to the extent agreed on June 6 and still has some presence. Senior Army officers said, however, that in Hot Springs and Gogra Post, the Chinese had disengaged by upto 2.5 km.

The Army is now preparing for the standoff with China to continue for a long time and has started to outline stocks and materials needed for winter deployment of troops at such a high altitude. China has brought a large number of troops, estimated to be around 40,000 soldiers, in the front and depth areas at the LAC in the Ladakh sector where they have also amassed tanks, artillery, aircraft and radars, jammers.

Opening the Air Force commanders’ conference, the defence minister said the professional manner in which the IAF conducted the airstrikes in Balakot as well as the rapid deployment of IAF assets at forward locations in eastern Ladakh had sent a strong message to India’s adversaries. Air Chief Marshal R.K.S. Bhadauria, Chief of Air Staff, said the IAF was well prepared to counter short-term and strategic threats and its units were evenly poised to counter any aggressive action.