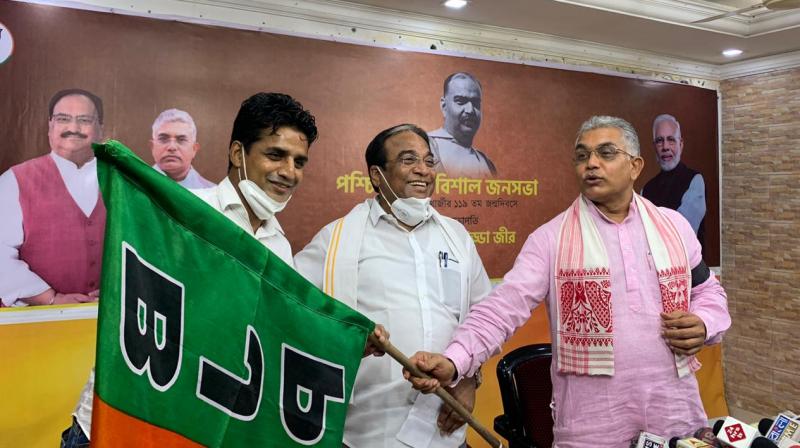 Footballer Mehtab Hossain receives the BJP party flag at the joining ceremony at the BJP HQ in Kolkata.

Kolkata: Barely 24 hours after joining the BJP, former Indian footballer Mehtab Hossain quit the party on Wednesday. He announced his U-turn in a Facebook post.

The development is an embarrassment for state BJP chief Dilip Ghosh and other state leaders who are in New Delhi to attend a meeting with the top leadership including Amit Shah.

The state BJP has accused the ruling Trinamul Congress of using pressure on Mehtab to get him to change his decision.

On Tuesday the BJP announced Mehtab Hosein as a prize catch, hoping to present him as the Muslim face of the party ahead of the Assembly elections next year. Dilip Ghosh was there to welcome Hossain into the party.

Hossein has played for club teams East Bengal and Mohun Bagan and the Indian football team.

Announcing his retraction, Mehtab said, "My wish to enter politics was to be with the people who made me. I felt I might be able to reach more people if I join politics. But then there is a strange realization. Those, to be with whom I joined politics, requested me not to do it actively. That means, somewhere their emotions do not want to see me as a politician. To them, I am still a footballer, a midfield general. So I decided to leave politics after thinking a lot. Sometimes, smaller interests have to be sacrificed for a greater cause."

He added, "I don't want my life to change. None in my family Moumita, Zidane, Xavi supported my suddenness. They were pained like the ordinary people were. There is no hatred and anger towards anyone. No one from outside is forcing me to take this decision. I am moving away from the field of politics on my own. I am not associated with any political party from today. I apologize to all of my well-wishers for this decision."

West Bengal BJP general secretary Sayantan Basu alleged, "It has been learnt that the Trinamul Congress threatened Mehtab's family to put pressure on him leave our party like it did in the past in the districts."