'We will be undertaking a three-day cycle march from Gaya to Patna on July 28,' Tejaswi told reporters on assembly premises in Patna. 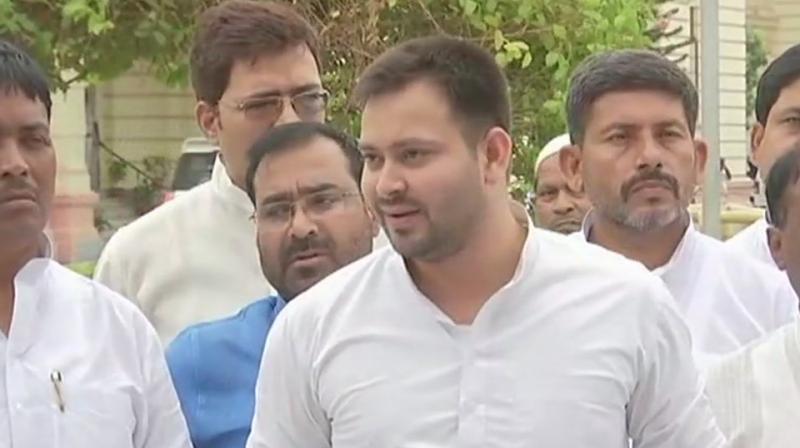 'Bihar has been ranked at bottom as per Public Affairs Index 2018. We will tell the people that Nitish Kumar has destroyed Bihar completely,' Tejaswi said. (Photo: ANI | Twitter)

"We will be undertaking a three-day cycle march from Gaya to Patna on July 28 to expose Nitish government's failure on various issues especially on deteriorating law and order situation," Tejaswi told reporters on the assembly premises in Patna.

It has become quite difficult for girls to move out even with their parents as the state government has no control on law and order in Bihar, the leader of opposition in the state assembly claimed.

"During our cycle march, we will raise various issues before the people - the issues of farmers, labourers, youths, education, law and order and the repeated rape incidents in Gaya, Muzaffarpur and other places including at government funded shelter homes," he said. Claiming that developmental work has come to a standstill in Bihar, he said the state has been ranked at the bottom as per the Public Affairs Index 2018, whereas Kerala has ranked number one as the best governed state.

"Bihar has been ranked at bottom as per Public Affairs Index 2018. We will tell the people that Nitish Kumar has destroyed Bihar completely," Tejaswi said.

The Public Affairs Index 2018 has been released by Bengaluru-based think tank Public Affairs Centre. It examines governance in states through a data-based framework, ranking them on social and economic development.