An NCERT booklet with 1,000 sentences/phrases had been prepared. It carried 200 sentences for each grade — from grade I to V. 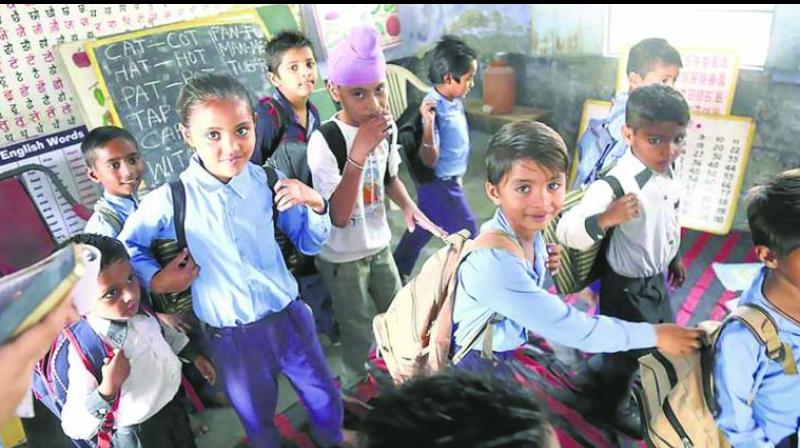 Students of a government primary school in Haryana. Under the new government intiative to improve primary education, schools will be made bag-free and instad they will be provided locker facilities so that burden on students can be reduced.

An NCERT booklet with 1,000 sentences/phrases has been prepared. A primary teacher and one block resource person has been trained to make students learn one sentence every day, minimum 20 per month for 10 months.

Chandigarh: The BJP government in Haryana may have tried to promote Sanskrit since its very beginning. However, now due to the pressure from the parents who want their children to be proficient in lingua franca of the world, the Haryana School Education Department has now launched an initiative “I am not afraid of English” which is aimed at introducing English right from Class 1.

Even though the English is already taught from Class 1 in government schools, but the standard of students in these school is abysmal. Under the new initiative, there is an effort to make students proficient in the language.

“It will enable teachers to help students read, write and speak English. The initiative has already been launched in 180 primary schools and will be introduced in 238 more in the current academic session,” said Rajnarayan Kaushik, director, Elementary Education.

He said an NCERT booklet with 1,000 sentences/phrases had been prepared. It carried 200 sentences for each grade — from grade I to V.  “A primary teacher and one BRP (Block Resource Person) has been trained to make students learn one sentence every day (minimum 20 per month for 10 months). In this way, students will be able to read and write at least 1,000 sentences till they graduate to the next level,” he explained.

Further, six language labs have been established in selected Model Sanskriti Schools across the state to facilitate digital learning and improve the listening and speaking skills of students. More such labs will be set up later in other schools. The 180 primary schools where the initiative, in partnership with NGO “Humana People to People India”, has been launched, will be bag-free for children in Classes I and II. The schools have been provided lockers.

According to a random survey of more than 30,000 parents by the Haryana Government Primary Teachers Federation, most parents are not happy with the existing system.

“We had collected three samples from each school through 29,000 JBT teachers. More than 30,000 parents want teachers not to pass their children as they are not good in English and studies in general. Poor academic knowledge creates problems for schoolchildren in higher classes,” Rajkiya Prathmik Shikshak Sangh general secretary Deepak Goswami said.

At least 15 per cent of primary students are not good in studies but they were promoted to senior classes despite failing in the lower class.

Recent survey data published by the National Council of Educational Research and Training shows that 45% of Class 5 students in Haryana’s government and government-aided schools got between 0%-35% answers correct in a reading comprehension exercise, while some 19% got between 35%-50% answers right.

According to the president of Haryana Rajkiya Parathmik Siksha Sang, Tarun Suhag, there are aroud 82 hundred primary schools in the state and roughly 4 lakh students in these primary schools.

“The state government’s  new initiative will be limited to few schools, if the government is really serious to improve the quality of education in government primary schools than it must agree to our long pending suggestion of starting nursery classes in government schools. This will help students in small villages to be groomed and taught in a fun way before they reach Class 1,” he says.