'The stand of the Congress on the Rafale deal is clearly not in the interest of the country,' Ravi Shankar Prasad said. 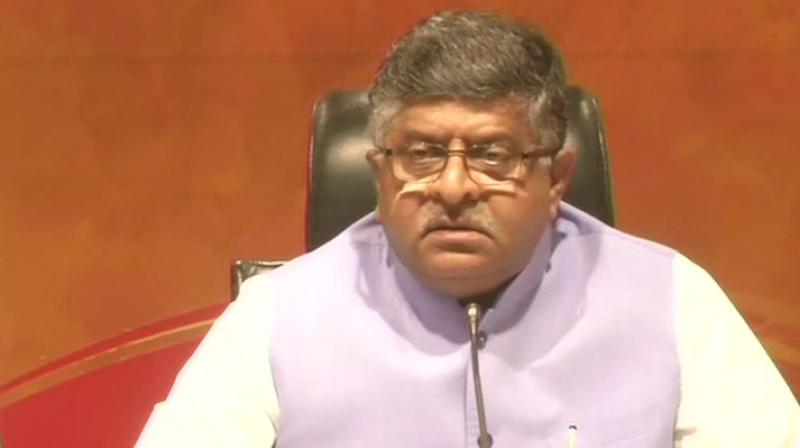 The BJP leader claimed that Congress leaders like former prime minister Manmohan Singh and Antony may understand the sensitivity involved with the deal but were 'forced' to demand that the NDA government share details of the fighter aircraft, to defend Gandhi. (Photo: Twitter | ANI)

New Delhi: The BJP on Monday dismissed the questions raised by the Congress on the Rafale deal as a "collective singing of falsehood" to defend Rahul Gandhi, who, it said, was "prima facie guilty of breach of privilege for misleading" the Lok Sabha.

Law Minister Ravi Shankar Prasad also cited replies made in Parliament by then UPA government on defence purchases and other issues in which its defence minister, first Pranab Mukherjee and then AK Antony, had declined to share price details and other information on the ground of national security. The UPA government's stand was right, Prasad said as he accused Gandhi of trying to wreak havoc on India's security for his political considerations.

"The stand of the Congress on the Rafale deal is clearly not in the interest of the country," he told reporters. The Congress has been demanding that the government share details of the Rafale fighter aircraft price as it accused the Modi government of buying them at a much higher price than it was originally negotiated.

Prasad asserted that the base price of each aircraft negotiated by the government with the French government is at 91.75 million Euro nine per cent less than the 100.85 million euro the UPA government had decided upon.

The government has been forthcoming in declaring the aircraft's price but details of operationally sensitive matter including India specific enhancement and logistics support package would end up disclosing the vital information about the Indian Air Force strength, the minister said.

"As these sensitive matters overlap the price details, the previous government (UPA) on many earlier occasions did not disclose them on the floor of the House in public interest. This includes import of weapons from the USA and imports of defence items and missiles from Israel," he said.

The BJP leader claimed that Congress leaders like former prime minister Manmohan Singh and Antony may understand the sensitivity involved with the deal but were "forced" to demand that the NDA government share details of the fighter aircraft, to defend Gandhi.

"Dynastic parties are always a crowd around a family. That is true of the Congress. Since a member of the family has resorted to falsehood, the crowd around the family has no option but to collectively sing the tune of falsehood. This is what has happened today," he said.

The UPA government was a "byword for corruption" and the Congress has been raking up a "manufactured" issue to create a smoke screen that others are also corrupt like it, Prasad alleged and rejected the Congress' threat of a breach of privilege motion against Prime Minister Narendra Modi and Defence Minister Nirmala Sitharaman as an act of "misplaced bravado".

The Congress had accused Modi and Sitharaman of misleading Parliament and the country on the Rafale pricing issue, claiming there is no clause in the 2008 pact between India and France that prevents the government from divulging price details of the aircraft.

Prasad said this might have happened for the first in the world, not the least in India, than a foreign government denied a statement made on a domestic issue in Parliament. Following Gandhi's claim in the Lok Sabha that the French president had told him that there is no secrecy pact on the Rafale deal pricing with India, the French Embassy had said in a statement that a security agreement it concluded with India in 2008 legally binds the two countries to protect the classified information relating to operational capabilities of defence equipment.