The soldiers alighted from the vehicles and started beating them up, and later, called in colleagues from 24 Rashtriya Rifles. 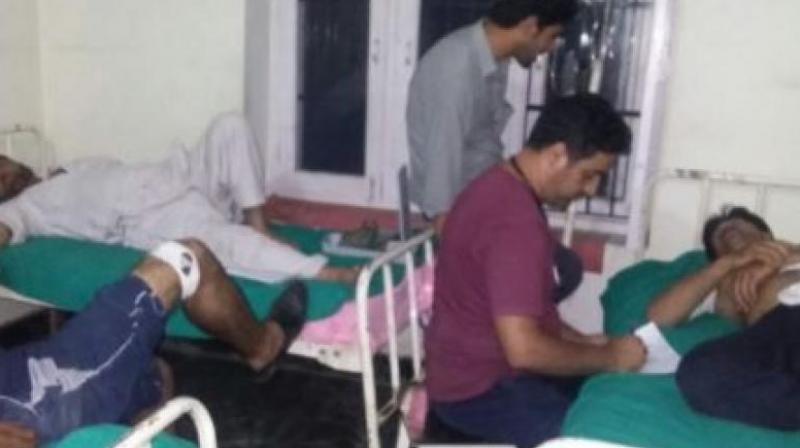 The soldiers allegedly thrashed the police check post at Sonamarg which had stopped them from going ahead. (Photo: ANI | Twitter)

Srinagar: Seven Jammu & Kashmir policemen were injured when Armymen in civilian clothes thrashed them in Gund, in northern district of Ganderbal, late Friday night, following an altercation at a checkpost.

The Armymen were returning from Amarnath pilgrimage in four private vehicles after the permissible time when they were stopped by the police at the Gund checkpoint from proceeding further. The soldiers alighted from the vehicles and started beating them up, and later, called in colleagues from 24 Rashtriya Rifles.

Over 30 soldiers, including some in uniform, then went to the Gund police station nearby and beat up the staff and ransacked the premises, the police said.

A case of attempt to murder, causing hurt and criminal conspiracy has been registered against the unknown Armymen, the police said on Saturday.

Army spokesman Colonel Rajesh Kalia, in a statement here, said, “A minor altercation took place yesterday night between some Army personnel returning from Amarnath yatra in civil dress. No major injuries were suffered in the incident and the matter has been resolved by personal intervention of senior officers. Measures to prevent reoccurrence have been taken.”

Sources said two of the policemen were grievously injured and  assistant sub-inspector Ghulam Rasool, who received head injury, was among those being treated in hospital.

The police said that state director general of police, Shesh Paul Vaid, has been assured by the commander of the Srinagar-based Chinar (15) Corps that action would be taken against the soldiers involved in the incident.

“DGP @spvaid has taken up the #Gund Ganderbal incident with Corps Commander who is looking into it and has assured action,” tweeted the J&K police.

Mr Abdullah tweeted, “Why would the Army beat up J&K police personnel in a police station? This requires immediate clarification/action by the authorities.”

In another tweet, he said, “On the face of it, the J&K police party was implementing the SOP of not allowing yatri movement after 7.30 pm. Army chaps were yatris in civvies.”

Mirwaiz Umar Farooq tweeted, “Sad to hear about the severe beating of Kashmiri policemen by Army, by virtue of being Kashmiri even those who aid state oppression not spared!”

The incident took place when private vehicles, carrying Army personnel in civil clothes, were returning from the Baltal base camp of Amarnath yatra and were signalled to stop at the Sonamarg checkpost. However, the vehicles did not stop and kept proceeding towards Ganderbal, the police said.

Baltal, 93.5 km from Srinagar, is the base-camp of the shorter route to Amarnath.

The Army men were travelling beyond the cut-off time, set in view of terror threat, as per which all Srinagar-bound vehicles have to cross Sonamarg, about 80 km north of Srinagar, by 2 pm, the police said.

As the vehicles reached Gund, policemen manning the checkpost stopped them, sparking the altercation that turned violent, police said.

The soldiers were trying to enter Srinagar which was not allowed under the standing written order of the IGP.

“We informed the Commanding Officer of a nearby Army camp that he should take these jawans to his camp for the night,” said a police officer.

“But suddenly troops came and stormed the police station in Gund, beat up cops, ransacked everything that came in their way. Police records were also damaged,” he said.