India   All India  23 Jun 2021  India reports 40 cases of Covid Delta Plus variant, most cases from four states
India, All India 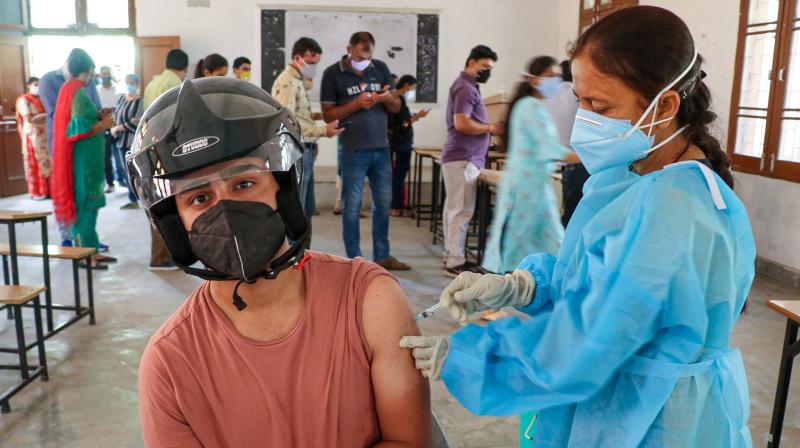 A beneficiary receives a dose of Covid-19 vaccine at a vaccination centre in Jammu. (Photo: PTI)

New Delhi: India on Wednesday reported 40 new cases of the deadly Delta Plus variant of the novel coronavirus infection, which is said to trigger the third wave of the pandemic in the country.

The Delta Plus variant is an emerging form of the Delta variant, the variant first detected in India.

The Union Health Ministry on Tuesday categorised the Delta Plus variant as a ‘variant of concern’ and directed states to take up immediate containment measures in clusters where the variant has been detected.

A variant of concern (VoC) carries the highest threat perception of a coronavirus variant, which is characterised by increased infectivity, transmissibility or resistance to vaccines and treatment. A variant of interest (VoI) is a degree lower.

On Tuesday, Union Health Secretary Rajesh Bhushan said the Delta Plus variant has been detected in 22 samples across six districts in the country.

“In India, Delta Plus variant has been detected in 22 samples. Sixteen of them have found in Jalgaon and Ratnagiri districts in Maharashtra; the remaining have been detected in Kerala (Palakkad and Pathanamthitta) and Madhya Pradesh (Bhopal and Shivpuri)… But we don’t want this to assume significant proportions,” Bhushan added.

Maharashtra Health Minister Rajesh Tope on Tuesday said the state has found 21 cases of the 'Delta plus' variant so far. "The highest nine cases were reported in Ratnagiri, followed by seven in Jalgaon, two in Mumbai, and one case each in Palghar, Thane and Sindhudurg districts," Tope told reporters.

Tope also added that complete information about the people detected with the 'Delta plus' variant is being sought, including their travel history, whether they were vaccinated or not, and if they were re-infected.

Meanwhile, Kerala reported the first case of the Delta Plus variant on Monday. According to officials, a four-year-old boy from ward 14 of the Kadapra Panchayat in Pathanamathitta has been detected with the variant.

The variant was confirmed in the patient during a genome sequencing of his sample, carried out at the CSIR-IGIB in New Delhi.

Meanwhile, officials said the first case in Pathanamthitta was followed by two other cases in Palakkad.