The protesters also demanded that a high-level committee be formed and families of all deceased get compensation. 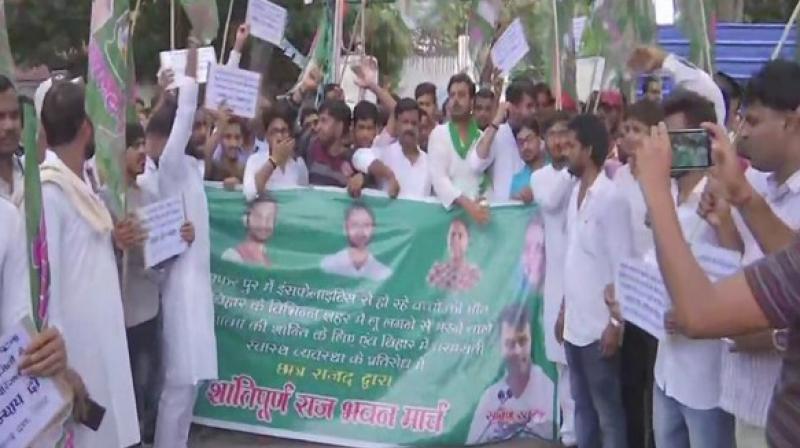 Holding posters and shouting slogans, they marched to Raj Bhavan in the state capital. (Photo: ANI)

Patna: After death toll due to Acute Encephalitis Syndrome (AES) reached 125 in Bihar on Sunday, members of Rashtriya Janata Dal's (RJD) students wing carried out a protest march against the state government.

Amid slogans of "Nitish Kumar Murdabad" and "Mangal Pandey Isteefa Do", the protesting members demanded the immediate resignation of the state's Health Minister, Mangal Pandey.

Holding posters and shouting slogans, they marched to Raj Bhavan in the state capital.

Blaming NDA government in Bihar, a student representative said, "The condition of public health care has gone extremely bad in Bihar and Nitish-Modi government is majorly responsible for this."

"We want Mangal Pandey to take due responsibility of the deaths of children and step down from the post of Health Minister", he further added.

The protesters also demanded that a high-level committee be formed and families of all deceased get compensation.

"If a high-level committee is not formed and no compensation is given to families, we will carry forward our protest with more aggression throughout Bihar. We will not stop this protest until the Nitish-Modi duo takes responsibility for the death of children", said a student representative.