The anti-submarine warfare specialist warships and aircraft were positioned to help in the hunt for the missing Pakistani submarine. 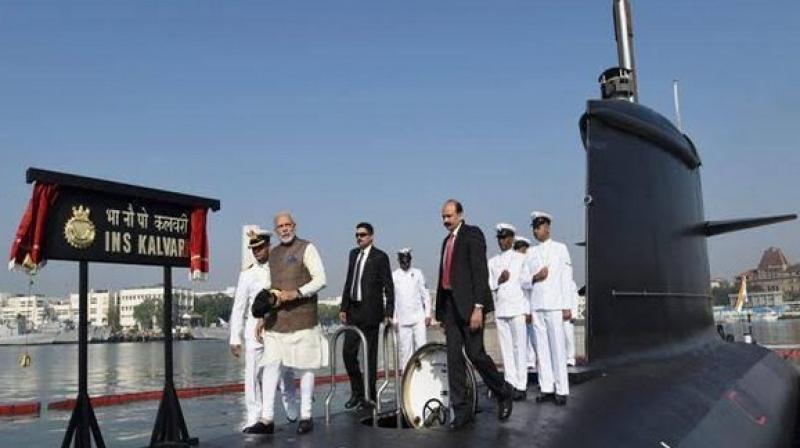 After 21 days of an extensive search, the Indian Navy finally located the PNS Saad on the western side of Pakistan. (Photo: ANI)

New Delhi: Soon after the Pulwama terror attack, India pulled out its Navy from an exercise and deployed a major part of its fleet, including nuclear and conventional submarines, close to Pakistani territorial waters.

During the aggressive deployment of the naval assets by the Indian side, the Pakistanis were getting an impression that New Delhi might use its maritime force to avenge the killing of its 40 CRPF personnel in the suicide bombing by Jaish-e-Mohammed (JeM).

India was continuously keeping an eye on the movement of the Pakistani military but after Indian Air Force hit the Jaish terrorist factory in Balakot, one of the most advanced Pakistani Agosta-class submarines - PNS Saad - vanished from the Pakistani waters, a senior government source said.

Having accounted for all other surface warships and all the submarines, the vanishing act done by the PNS Saad fitted with Air Independent Propulsion (a technology which allows the submarines to stay for a longer period under the water than normal submarines) swung the entire Indian Navy swung into action.

"The location near Karachi from where the PNS Saad vanished, it could reach the Gujarat coast in three days and the headquarters of the western fleet in Mumbai within five days and was seen as a major threat to the security of the country," the sources said.

The anti-submarine warfare specialist warships and aircraft were positioned to help in the hunt for the missing Pakistani submarine.

"All the areas where it could have gone in the given timeframe, extensive searches were carried out by the Indian Navy. P-8Is were pressed into service to locate the submarine along with the coastal areas of Gujarat followed by Maharashtra and other states," the sources said.

All precautionary measures had been taken by the Navy to ensure that even if the PNS Saad had entered Indian waters, all necessary actions were to be taken to force it to come on the surface, and if required take military punitive action against it, the sources said.

Nuclear submarine INS Chakra had also been deployed in an aggressive posture along the Pakistani waters and instructed to keep looking for the missing Pakistani submarine. The Indian Navy Indian Navy's latest induction, Scorpene-class submarine INS Kalvari, was also deployed in the hunt while their posture kept threatening Pakistan against doing any misadventure in the Indian waters.

As the days progressed, the Indian Navy kept expanding its area of search for the Pakistani boat and satellites were also used to locate it, meanwhile, the force was almost certain that the Pakistanis may have kept it hidden somewhere else.

After 21 days of an extensive search, the Indian Navy finally located the PNS Saad on the western side of Pakistan. It was sent there for hiding, to ensure a covert capability in case of extension in hostilities in the aftermath of the Balakot airstrikes.

Sources said the Navy is maintaining complete surveillance of the Arabian Sea, especially Pakistani waters, and is aware of Pakistan's naval activities in the area.

Soon after the tensions spiked, the Navy had deployed over 60 warships, including the aircraft carrier INS Vikramaditya, along with its battle group as part of a rapid redeployment in the North Arabian Sea.

"The overwhelming superiority of Indian Navy" in all three dimensions forced the Pakistan Navy to remain deployed close to the Makran coast and not venture out in the open ocean," a statement by Indian Navy spokesperson Captain DK Sharma had said at that time.