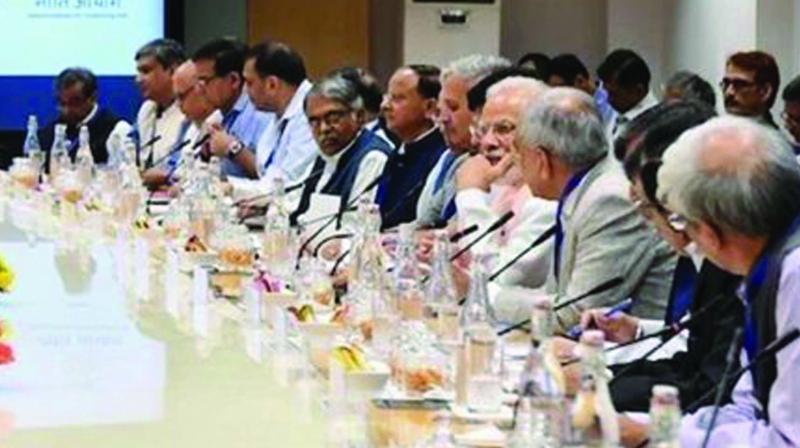 New Delhi: Mindful of rising unemployment and poor economic growth, Prime Minister Narendra Modi on Saturday emphasised on the need for initiating second generation reforms across all sectors, and directed policy makers and thinkers to put their heads down and work towards strengthening the fiscal scenario.

Lack of credit flow was identified as one of the major reasons behind sluggish economic growth during the two-hour-long interaction of the Prime Minister with economists and professionals from various sectors, which was held at Niti Aayog.

In fact, several economists underlined the need for major reforms in the banking sector, suggesting among other things, opening up foreign direct investment (FDI) in banking which would help in fund infusion to the tune of $250 billion and thus open up credit flow which is currently stuck, sources aware of proceedings told this newspaper.

Advocating that “major surgery” was needed in the financial sector to boost economy, measures to improve credit flow like recapitalisation of nationalised banks and merger of small banks with bigger ones, were suggested.

With the focus of the meeting mainly on job creation, Mr Modi told the experts that the economic reforms initiated in 1991 had helped in bringing India to the global economic forefront. However, he said, now there is a need to give a fresh impetus to those initial steps by introducing second generation reforms to further propel the Indian economy.

Aware of the long-term impact of a declining economy, top sources privy to developments said that Mr Modi indicated during the meeting that it took him five years to establish confidence among the people, and now that people have reaffirmed their faith in him, it is time to fulfil their aspirations and address these issues by getting down to work.

Sources said that leaders of these groups later made presentations before the Prime Minister, suggesting several measures to create jobs in these sectors.

The ideas thrown up by these groups would be short-listed and the best among them would be selected for improving the employment scenario.

Among a slew of measures, experts from the health sector suggested that one bed in a hospital could help create 11 jobs directly as well as indirectly, as ancillary service staff could be further trained to help perform roles apart from their defined ones.

They further suggested that rather than spending on opening new hospitals, existing hospitals could be used for creating additional seats for new students, which would help in job creation.

Greater usage of Artificial Intelligence (AI) in the health sector was suggested along with creation of a health infrastructure fund on the lines of IIFCL, where government and private sector both could contribute monetarily.

This, the experts said, could help in improving wellness centres in tier two and three cities, and lead to more job opportunities.

In the education sector, online freelancing was suggested as a stream which could help create jobs in the IT sector, while sectors related to sustainable development were also identified as potential job creators.