The auditorium can accommodate at least 100 people but 200 more can squeeze inside the courtyard of his house. 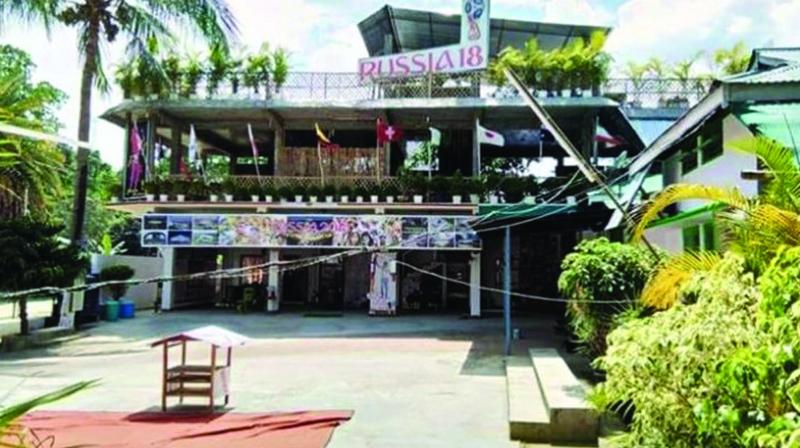 Guwahati: Football lovers are having a ball as the FIFA World Cup fever has gripped India. Though the country is not participating in the game, excitement is at an all-time high. Assam and the other Northeastern states are no exception.

The passion for football in the region is such that Putul Borah, a 57-year-old businessman from Diphu town in Assam, has built an auditorium to screen matches for the game buffs. He took a Rs 13-lakh loan from a bank for the purpose.

The diehard fan of Germany has named the auditorium — The German Stadium. Around one hundred people gathered at the “stadium” to watch the opening ceremony and the first match between Russia and Saudi Arabia.

The ceremonial evening started with the cutting of a cake made specially to mark the occasion. Former India player Gilbertson Sangma  and a host of other fans were present. “We are going to watch all the matches. Let’s watch football and spread love,” said Mr Borah.

The auditorium can accommodate at least 100 people but 200 more can squeeze inside the courtyard of his house. All of them can sit and watch the matches that will be beamed live on a 53-inch screen, with free tea and snacks for company.

Mr Borah, a football enthusiast, has been preparing for FIFA for the last two years. “The construction began two years ago. It has taken a long time but now I am ready for the show,” he adds.

“I have been organising screenings of football matches since 1990.  Thankfully, the State Bank of India sanctioned the loan for the auditorium in my wifes name,” he said.

Admitting that he always welcomes fans of all countries with open arms, Mr Borah said, “Supporters of Argentina, Brazil, Spain and other teams always come to my house to watch the matches. We celebrate their success and love the game for the unity it brings among the people. Let’s use football to spread the message of peace and harmony.”