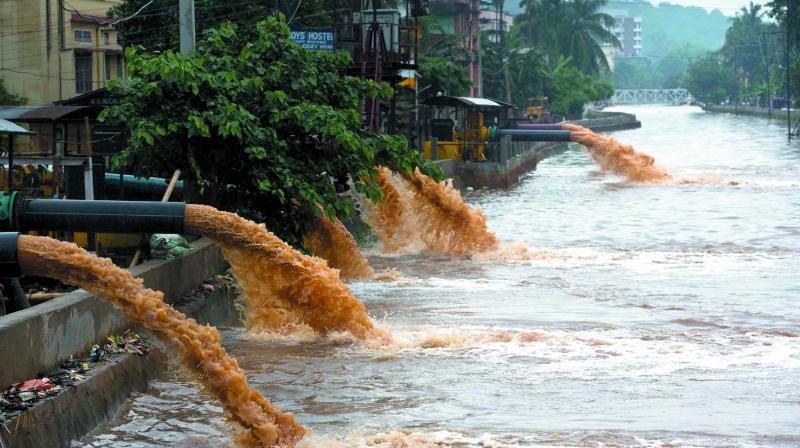 Motor pumps are used to divert flood water into a stream after rains in Guwahati Thursday. (Photo: PTI)

Guwahati: Heavy rainfall has reduced Guwahati to a deathtrap with at least three people, including a Class 7 student, losing their lives due to electrocution on the waterlogged streets of Guwahati in past 10 days.

Dulal Malakar, an employee of a KFC outlet, was walking to his residence at Sugam Lane on Zoo road on Thursday morning after doing the night shift when he stumbled upon a snapped high-voltage electric wire lying concealed on the waterlogged street. He died on the spot while another person was badly injured.

This came close on the heels of the tragic death of two persons, including a Class 7 student, due to electrocution in the flooded Zoo road on June 13, when the city was flooded after heavy downpour. Similar incident of death due to leakage of power in electrical poles and transformers were also reported during the deluge of 2016, which had created havoc in Guwahati.

Angry residents, who clashed with the police for responding very late to their call, alleged that it was not the flashflood, but the negligent attitude of Assam Power Distribution Company Limited that was killing people. The residents also alleged that they saw the deceased Malakar being trapped in electrical shock and kept on calling the power department to snap the power supply, but nobody picked up emergency service numbers.

All schools in the city were declared closed on Thursday as school buses were unable run through the water-logged streets.

The attendance in government offices and financial institutes in the city was also very thin.

Meanwhile, the district administration has announced Rs 4 lakh ex-gratia to the next of kin of the deceased who was staying in a rented house in the city with his family. He got married only six months back. The protesters demanded a job for his wife as compensation.

It is significant that Guwahati has been declared to be one of the smart cities of the country.