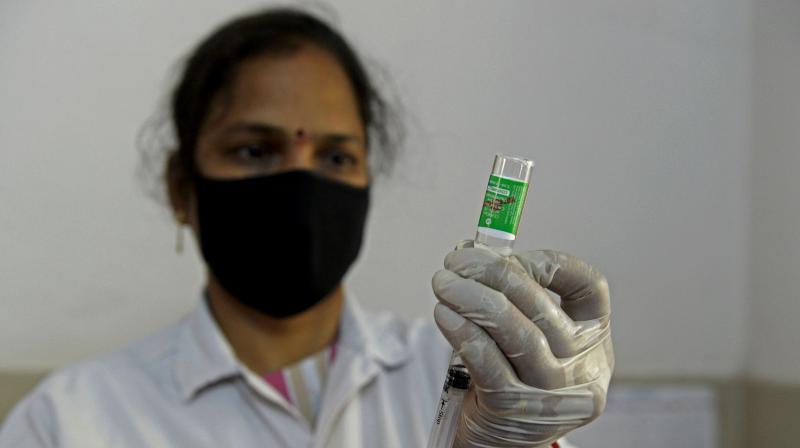 New Delhi: The Centre had recently released a report on the Adverse Effect From Immunisation (AEFI) detected so far from the population that has been vaccinated from COVISHIELD.

Government has claimed that since the COVID-19 vaccination drive was initiated more than 23,000 adverse events were reported through the CO-WIN platform from 684 districts of the country. Of these, 700 cases were reported to be serious and severe. The AEFI Committee’s in-depth case review of 498 serious and severe events found 26 cases to be potential thromboembolic (formation of a clot in a blood vessel that might also break loose and carried by the blood stream to plug another vessel) events following the administration of Covishield vaccine – with a reporting rate of 0.61 cases/ million doses.

However, in the absence of proper reporting mechanism and proactive approach of authorities to trace vaccinated people after they leave the vaccination site, such a claim may not be reflecting the true picture and full magnitude of AEFI and it is possible several cases of AEFI may be going unreported or undetected.

Mine is the first hand story of struggle to get AEFI recorded in India’s Capital city Delhi. It took me five days and huge effort to shake up the system from slumber and get the AEFI recorded for my 21-year-old son who was vaccinated for COVISHIELD on May 13.

My son was vaccinated on May 13 at EDMC PS Trilokpuri Site 1 (East Delhi) at around 11.15 am with COVISHIELD. He was kept for 30 minutes at the site to check for AEFI during which he had no other problem other than pain in arm. Back home, my son developed 101 degree fever at 6.30 pm on May 13 and complained of very sharp shooting pain in vaccinated arm. I gave him Dolo 650 for fever, as advised by the doctors. He again had fever next morning. But it was the fever on the evening of May 14 at 5.30, that alarmed me. My son reported high fever and numbness in hand. His hand was getting cold and finger nails started turning blue.

We called some doctors and they suggested we rush him to emergency in a hospital as this was possible a reaction from the vaccine. However, a doctor friend saw him through video call and checked his tongue, eyes, palm and hands. He said none of them were blue and only finger nails were getting blue. My son’s pulse at this point was 73, BP 120/80, Oxygen saturation was 95 and fever 102. The doctor asked us to give lots of fluid to the boy and wait for some time before going to the hospital while he figured where to get him admitted since hospitals were not easily accessible due to high volume of COVID cases. Thankfully, in about 30 minutes, his nails started turning pink again. His hands and feet were warm, there was no numbness and sensation was back.

This was the first time we had experienced such a thing. So I thought of reporting it as AEFI. The real struggle began now. None of the helpline numbers given by the government – 1075, 191, +911123978046, 0120-4473222 -- were functional or reachable. There are no emails, no phone numbers of doctors available on any government site to report AEFI. No provision on CoWin or Aarogya Setu app.

After my son stabilized I went back to the vaccination centre, a school, which was shut after 5 pm and got the number of the doctor on duty. He directed me to a Nodal Officer, who said he can only treat but has no role in recording AEFI. In the meanwhile, I had tagged ICMR, Union Health Ministry, Drugs Controller General of India, Serum Institute of India asking for contact details to report AEFI. There was no response. I also tagged Mr Adar Poonawala who heads SII to guide me to report AEFI for his vaccine. He too has not responded so far.

Finally, I had to write in the group of health journalists after which my colleagues got active and with the intervention of some senior bureaucrats,  I could manage to finally “report” AEFI of COVISHIELD. This was four days of the AEFI.

After registering my AEFI report the district immunization officer called to take my son for a cardiological checkup. There was a fear of thrombosis. I rushed. His ECG and blood tests were conducted, which thankfully were normal. But what if I had not made so much noise? What if my boy actually had thrombosis or some other severe side effect from the vaccine COVISHIELD? I would have lost four crucial days.

I have been hearing horror stories of people dying of cardiac arrest or other complications after vaccination. Two days back my sanitation staff came to me saying she will not get her son vaccinated because someone died in her neighbourhood soon after the vaccine dose. And all such things go unreported.

In my son's case the nodal official said he developed allergy to the vaccine. AEFI is exactly that. But we hate recording such data. If this is the condition in Delhi where educated are struggling imagine what would be happening among general population in other areas.

It is important for the government to take AEFI tracking more seriously and aggressively as it is doing for vaccination.

Health Ministry said AEFI data in India showed that there is very miniscule but definitive risk of thromboembolic events. The Health Ministry has issued advisories to healthcare workers and vaccine beneficiaries to encourage people to be aware of suspected thromboembolic symptoms occurring within 20 days after receiving any COVID-19 vaccine (particularly Covishield) and report preferably to the health facility where the vaccine was administered.

People have to watch out for breathlessness, pain in chest, pain in limbs/pain on pressing limbs or swelling in limbs (arm or calf), multiple, pinhead size red spots or bruising of skin in an area beyond the injection site, persistent abdominal pain with or without vomiting, seizures in the absence of previous history of seizures with or without vomiting, severe and persistent headache with or without, weakness/paralysis of limbs or any particular side or part of the body, persistent vomiting without any obvious reason, blurred vision or pain in eyes or having double vision, change in mental status or having confusion or depressed level of consciousness, any other symptom or health condition which is of concern to the recipient or the family.