India   All India  23 May 2018  Stress time for kids: Bring back the joy of studying
India, All India

Stress time for kids: Bring back the joy of studying

The parents are also blind to the fact that there are various other things and streams a child can pick as career choices. 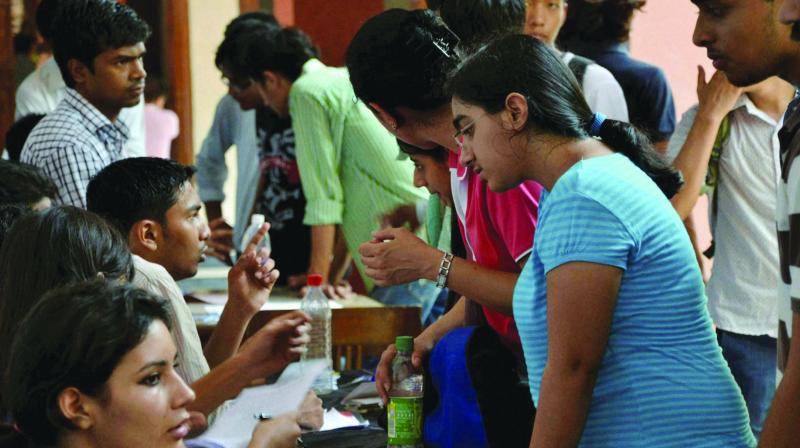 Admissions to colleges teaching engineering and medicine, to colleges of fine universities, come at a huge price.

It is that time of the year again, when lakhs of school children will be put to the test and will stand on the threshold of their future. This future may be a direct result of this test.

The board exam results are out and some will be out soon. In India especially, a great deal of weight age is given to the result of these exams and subsequently also to the dozens of entrance tests aspiring students appear for. It seems that an entire lifetime of schooling and living, simply boils down to how they score in their boards. Society has moulded itself in such a way that less than a resounding success is deemed a failure. There is no place for mediocrity.

Admissions to colleges teaching engineering and medicine, to colleges of fine universities, come at a huge price. Most often, entire childhoods are laid out in sacrifice for the opportunity to walk through the hallowed halls of such institutions. While aiming for the best is perfectly all right, one has to question the plight of those who do not fulfil their aspirations and one daresay, the aspirations of their families. A lot is at stake. Holidays, extra curricular activities, fun and games are sacrificed at the altar of the Class 12 board exams. All the children and their parent’s do is slog collectively towards that goal. The goal proves elusive to countless. Naturally. Our colleges of quality are not that many and only a small percentage of students make it to the top most ranks.

Then too, it is not unusual to hear of fantastic results being denied admission, say to a Delhi University college or worthy one because the cut offs are formidably high. All those extreme sacrifices and blood and sweat spent, ding nothing but poring over books for many, many years come to a naught. The pressure is so high and the disappointment so intense, that it results in severe damage to the psyche of the student. More often than not, these incidents of scarring are not reported and go unnoticed, ignored or brushed away as weakness. The ones, which are reported end up making horrific headlines in newspapers and the same debate begins again- why does our education system pile so much stress on it’s students? Our education system is narrow and limited, unable to offer anything substantial to those students who do not have the acumen for conventional streams of study.

The parents are also blind to the fact that there are various other things and streams a child can pick as career choices. Streams diverse from engineering at the IITs and medicine.

In cities like Varanasi and Gwalior, aspiring children leave early morning for school and reach home only past dinnertime. They go directly from school to various coaching classes in the city. Such work hours are inhuman and one wonders how much of what they study is retained. The kids become zombies, battling fatigue going from class to class. Then they wake up early again and the cycle begins all over.

These classes sometimes begin as early as Class 9, a good four years before the board exam and the entrance tests. Companies which run these coaching centres are listed in the stock exchange- such is the demand and growth of these institutes and such is the hunger for a good admission.

No one says it is wrong to be ambitious. But it is certainly not right to lose all sense of balance and place the child’s future precariously on one outcome.

The need to ease out this pressure is immense. Both the parents and the students need to be counselled and calmed down. It is not the end of the world if the child does not score a 95 percent in her exams.

We have all heard of Kota and the mushrooming of coaching centres there. In fact, these centres now drive the economy of the city. Children are crammed into back to back classes, without time to even call back home and connect with their families for the basic emotional buffering which is so important at that tender age. Horror stories abound, yet, parents do not stop sending their children to Kota. In middle class homes, all the aspirations ride on the frail shoulders of the child. In rich families, the stress is less. They are able to send their children abroad for higher studies. In fact, these children may not even study much- they know they will not have to go through the grind of seeking admission to a good college in India.

As people who drive society and who are educators, we must reclaim the lost childhood of these students and bring back the joy of studying.

The other day, one read about a parent in Bhopal who threw a lavish party for his son, even though the boy had failed his exams. The father wanted to make a point- it did not matter and even if it did, it was certainly no matter for mourning or feeling ashamed. His son spoke to news persons and said he felt motivated and determined to do better the next time. He was also very grateful for his father’s support.  “This is how I want to motivate my son. After failing in exams, children go into depression and some of them even take the extreme step of ending their lives. I want to tell such children that boards are not the last exams. There is much more to come in life,” he said, adding, "My son can reappear in the exam again next year." Source- indiatvnews.com

As PRO VC of a school in Gwalior with a strength of over 3,000 students I am determined to make a difference in the area and make my school a happy place to be in.