India   All India  23 May 2018  Kumaraswamy, his deputy to take oath today, top Oppn leaders to attend
India, All India

THE ASIAN AGE. | VINAY MADHAV AND N B HOMBAL

Mr Kumaraswamy said legislators likely to be inducted in the Cabinet would be decided by Wednesday evening. 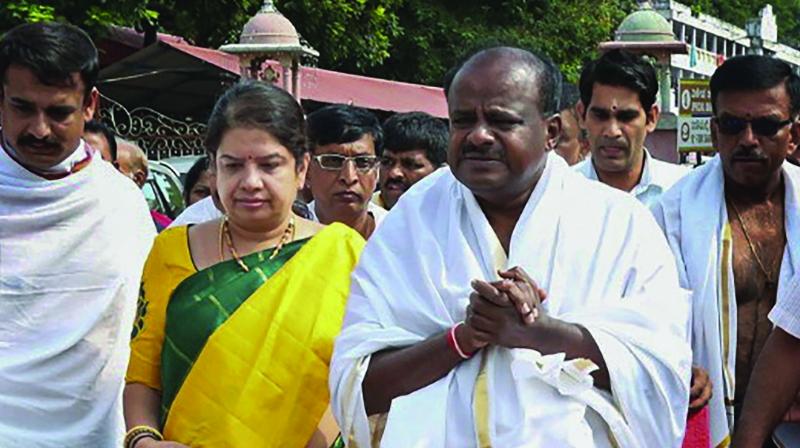 Bengaluru: Five days after Karnataka governor Vajubhai Vala invited the Congress-JD(S) coalition to form the government, state JD(S) president H.D. Kumaraswamy and his Congress counterpart Dr G. Parameshwar will take the oath as chief minister and deputy chief minister on Wednesday evening as a galaxy of top Opposition leaders from across the country will gather at the state’s majestic seat of power, the Vidhana Soudha.

After a day of hard-fought negotiations between the incoming chief minister and the Congress quartet, which includes state in-charge K.C. Venugopal, former chief minister Siddaramaiah, KPCC chief G. Parameshwar and the party’s trusted leader D.K. Shivakumar, the coalition partners have agreed on a power-sharing formula on the eve of the swearing-in. There will be only one deputy chief minister, Dr Parameshwar. The Cabi-net will have 22 Congress ministers, including Dr Parameshwar, and 12 from the JD(S). Congress president Rahul Gandhi has chosen former Speak-er K.R. Ramesh Kumar to take over as the presiding officer of the Assembly for the second time. He was Speaker during the rule of the undivided Janata Dal (1994-99). The post of deputy speaker will be held by the JD(S). The legislators likely to join the ministry will be chosen after the trust vote due on Thursday.

Sources in the Congress said that at the meeting held on Tuesday, the Congress leaders heeded the plea of Mr Kumaraswamy to restrict the number of deputy chief ministers to one as more DCMs would be a burden on the government.

Speaking to the media soon after the meeting, Congress general secretary in charge of Karnataka K.C. Venugopal said the agenda was restricted to a couple of critical issues, as the rest could be discussed by the coalition partners at a later date.

Mr Kumaraswamy said legislators likely to be inducted in the Cabinet would be decided by Wednesday evening. His counterpart in the Congress and other leaders would have one more round of discussions on Wednesday on drawing up the final list of candidates to be inducted into the ministry.

Answering a question, Mr Kumaraswamy said the coalition partners were not bothered about either black day celebrations or black band protests announced by the BJP leaders.

“I have not said that I will not waive loans of farmers. The media is saying that I have executed a U-turn on my pre-poll promises. All I have said is that I will discuss all issues with coalition partners before taking a decision. A coordination committee would soon be formed, where implementing manifestos of both parties will be decided. The list of ministers will be finalised by the coordination committee as well,” he added.