India   All India  23 May 2017  Next generation should be taught to use water prudently: Modi
India, All India

Next generation should be taught to use water prudently: Modi

Modi said successive govts in Gujarat have spent substantial amount of money for years so people in the state's arid region also get water. 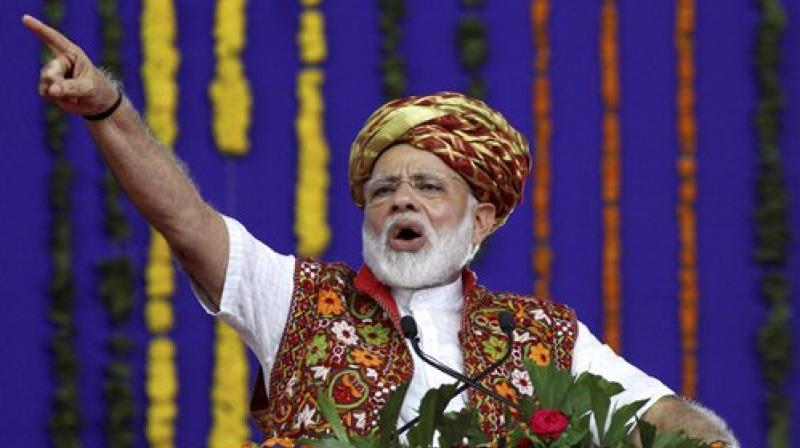 Bhachau: Prime Minister Narendra Modi on Monday said the next generation should be taught to use water judiciously and advised farmers to use drip and sprinkler irrigation systems.

He said successive governments in Gujarat have spent substantial amount of money for years so that people in the state's arid region also get water.

Modi was addressing a gathering here at the inauguration of the third pumping station on the Kutch branch of the Narmada canal network, which will take water to Tappar dam in Anjar taluka, which is over 600 km from the river Narmada that flows through south Gujarat.

"People of other states have an impression that Gujarat is a rich state. However, they do not understand that here the government has to spend huge amount of money year after year to provide drinking water to people," Modi said.

Referring to the problem of drinking water faced by arid regions of the state like Saurashtra, Kutch and the northern parts, he said money had to be spent on providing drinking water by tankers in many villages and towns of Gujarat year after year.

From the time the BJP led by Keshubhai Patel came to power in the state in 1998, till the present dispensation led by Chief Minister Vijay Rupani, Gujarat has focused on making arrangements to bring permanent solution to water woes, the prime minister said.

Modi, who was the chief minister of Gujarat between 2001 and 2014, had also focused on completion of the Sardar Sarovar Project on the Narmada river, to provide water to north Gujarat, Kutch and Saurashtra.

"As successive governments in Gujarat had to make arrangements so that water reaches arid areas, development expenses had to be slashed, expenditure to uplift the poor also got dented," he said.

"Now that Ma (mother) Narmada has reached us, I would request you to use it judiciously. Not only you, but the next generation should also be taught to use this water prudently. Farmers should use drip irrigation and sprinklers to water their crops," the prime minister said.

Chief Minister Vijay Rupani slammed the Congress alleging that the previous UPA government at the Centre had created roadblocks in completion of Narmada project.

"The UPA government did not give permission to raise the height of Sardar Sarovar dam. The prime minister (Modi), when he was the (Gujarat) chief minister, had to sit on a fast in Ahmedabad against the decision of the Central government.

After becoming the prime minister, he gave permission in 17 days to raise the height," Rupani said.

This is a third pumping station built on the Kutch branch of the canal network to bring the water to the interior areas of district.