India   All India  23 May 2017  Militant-turned-leaders convicted in Assam scam
India, All India

NIA special court convicts 14 out of 16 accused in the multi-crore rupees scam. 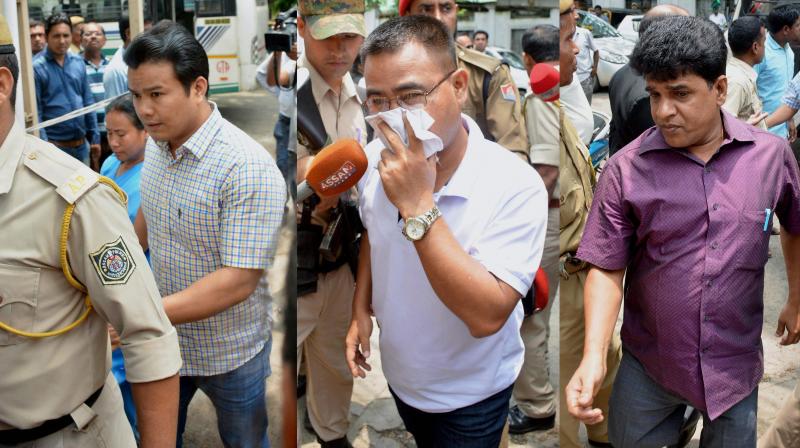 Accuseds in the multi-crore financial scam in the NC Hills Autonomous Council being produced at NIA court on the day of the final verdict hearing in Guwahati. (Photo: PTI)

Guwahati: The special court of National Investigation Agency (NIA) on Monday convicted 14 out of 16 accused in the multi-crore rupees North Cachar Hills Autonomous Council (NCHAC) scam in Assam. The court will pronounce the quantum of punishment for all the convicts on Tuesday.

Among those convicted by the court are militant-turned politician Jewel Garlosa and Niranjan Hojai who were the chairperson and commander-in-chief of disbanded militant outfit Dima Halem Daogah or DHD(J), respectively.

The two former militant leaders, who were released from judicial custody by the government in 2011 to initiate peace talks, had joined the ruling BJP and are serving as elected members of the NCHAC.

The court has convicted the accused under various provisions of Indian Penal Code, including sections related to waging of war, besides sections of Unlawful Activities (Prevention) Act, relating to funding terrorism, harbouring terrorists, terrorist acts etc.

Though, the case was first registered with the Basistha police station in April 1, 2009, following the recovery of `1 crore along with two pistols and letter heads of the banned DHD(J), the home ministry subsequently decided to hand over the case to the NIA, which in the course of the investigation recovered huge amount of cash meant for terror funding from Kolkata and Haflong.

With the ramification of the case stretching beyond the state, the NIA also recovered a huge cache of arms from Mizoram.