4,291 out of 14,378 COVID-19 infections — in the country were linked to the Tablighi Jamaat congregation in March 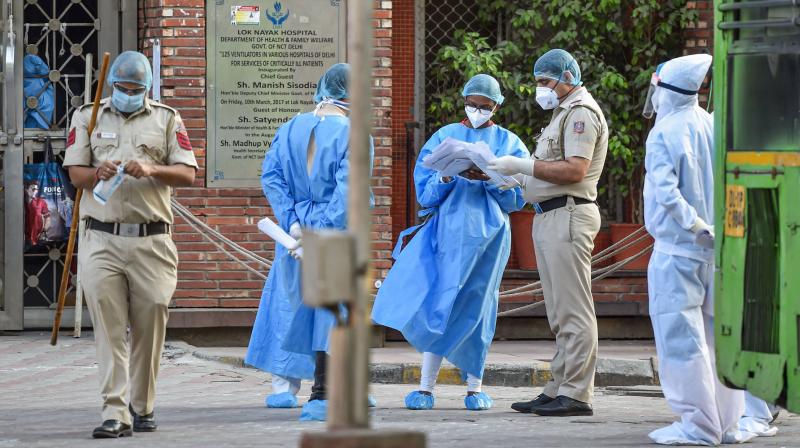 Medics wearing protective suits seen in the premises of LNJP hospital while members of Tablighi Jamaat are shifted from hospital to quarantine centre during nationwide lockdown in Delhi. PTI photo

New Delhi: The entire Muslim community cannot be held responsible for one group's "crime", Minority Affairs Minister Mukhtar Abbas Naqvi said on Thursday while reacting to instances of Muslims being blamed for the spurt in COVID-19 cases after Tablighi Jamaat congregation here, and asserted that most of the minority community members have condemned the group's action.

In an interview to PTI, Naqvi also expressed confidence that Muslims will abide by lockdown guidelines during the holy month of Ramzan.

He said across the India, imams, Ulema and Muslim organizations have unanimously decided that during Ramzan (the Islamic holy month), Muslims will not congregate in mosques, religious places and perform all rituals like 'Iftaar' (breaking of fast) and 'taraweeh' (special prayers) at home keeping in mind social distancing norms.

Naqvi said he has spoken with state waqf board officials, social and religious leaders, imams on adherence to the lockdown and social distancing guidelines during the Ramzan month starting Friday or Saturday evening and they have begun creating awareness among the people.

Asked about some people blaming Muslims for the spread of the pandemic after a large number of cases were found linked to the Tablighi Jamaat event at Nizamudddin here, Naqvi said the whole community cannot be held responsible for the "crime" of one organisation or one person.

"Whatever that organisation did, criminal negligence or crime...most Muslims have strongly reacted to it, condemned it and called for action against it. Entire community cannot be held responsible for one person or one organisation's crime," he asserted, adding that this has always been India's culture.

Last week, the Union Health Ministry had said 29.8 per cent of the total COVID-19 cases — 4,291 out of 14,378 COVID-19 infections — in the country were linked to the Tablighi Jamaat congregation in March at the group's headquarters in Delhi following which some sections of the society severely criticised Muslims, and blamed them for the spread of the pandemic in the country.

Naqvi's comments also assume significance in view of the 57-member prominent international Mulim grouping, Organisation of Islamic Cooperation (OIC), asking India to take "urgent steps" to protect the rights of its minority Muslim community and stop the incidents of "Islamophobia" in the country.

Hitting out at the OIC, the minister had said the country is "heaven for Muslims" and those trying to vitiate the atmosphere of prosperity cannot be friends of Indian Muslims.

Naqvi said those targeting Muslims are few isolated people who are trying to spread "misinformation" and "we should be united and isolate such elements".

On the COVID-19 lockdown restrictions during Ramzan, Naqvi said no Muslim wants to stay away from mosques during the holy month, but everyone has resolved to win this battle against coronavirus.

During this month, everyone should pray to God that not only India but also the entire world is freed from this COVID-19 pandemic, he said.

Asked whether Muslims have followed lockdown and social distancing guidelines till now, Naqvi said, "absolutely, the entire country is standing united in this fight against coronavirus."

"When Prime Minister Narendra Modi had appealed to people with folded hands, he had appealed to 130 crore Indians, it was not based on caste or religion. And everybody responded to his appeal and acted on it," he said.

People have faith that whatever Prime Minister Modi does is for the health and safety of the people, Naqvi said.

Asked about the role of the Opposition in the fight against COVID-19 and Congress chief Sonia Gandhi and Rahul Gandhi's suggestions, Naqvi said,"some people have criticized, but that is their habit, we don't take any offence to it."