India   All India  23 Apr 2018  Hurt and alienated, Muslims to vote for BJP’s defeat
India, All India

Hurt and alienated, Muslims to vote for BJP’s defeat 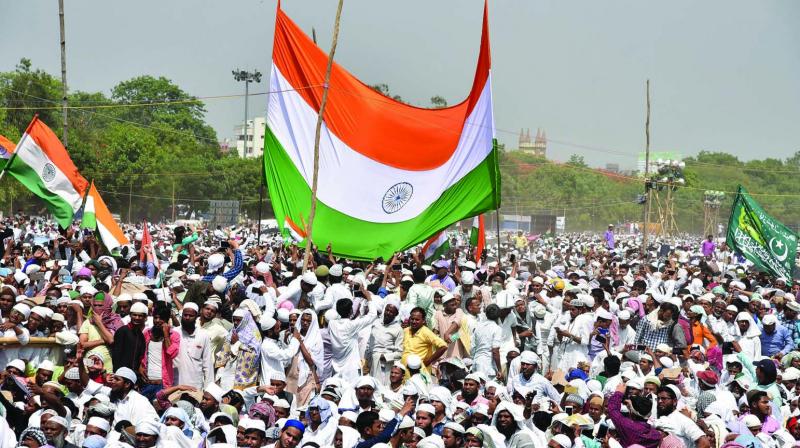 New Delhi: As calculations for 2019 poll start taking shape, how will Muslims, which comprise around 14.2% of Indian electorate, vote is a moot question. Judging the undercurrents in the minority society, political pundits and Muslim analysts opine that the community, as expected, will vote to defeat ruling Bharatiya Janata Party and move towards secular parties like Congress, Trinamul Congress, Samajwadi Party, Bahujan Samaj Party and Rashtriya Janata Dal etc.

Professor Sanjay Kumar of Centre for Study of Developing Societies says that wherever Congress is in direct contest with BJP like Karnataka, Madhya Pradesh, Gujarat and Rajasthan, Muslims will vote for Congress. “Elsewhere, other secular parties will be first priority of Muslims like in Uttar Pradesh, Muslims will preferably go with SP, BSP. Some percentage of votes will also go in Congress’ kitty. Similar seems the case of Bihar where RJD will be first choice of Muslims followed either by JD (U) or Congress,” says Kumar.

Muslims have decisive presence in 90 districts, 100 Lok Sabha constituencies and 720 Assembly seats of India. In 2014 elections, they had overwhelmingly voted for secular parties, thus presumably leading to consolidation of Hindu votes in favour of BJP.

In the four-year rule of BJP, Muslims have experienced hostile atmosphere in the country. Several incidents of anti-Muslim communal violence, killing in the name of cow slaughter and persecution in the garb of love jihad have been reported. According to media estimate, insecurities among Muslims is now at an all-time high.

BJP-led central government’s stand on Muslim-specific issues like criminalising instant triple talaq, polygamy and weighing possibilities of introducing Uniform Civil Code in the country also seem to have forced Muslims to think that this government is overtly anti-Muslim. Muslim women, whom BJP claims to be helping by penalising triple talaq, have demonstrated in large numbers against the triple talaq bill in many cities across the country. Last week, Muslim religious organisations of India organised a huge rally in Patna to oppose the bill and the government’s move to “interfere” in Muslim personal laws.

Kubool Ahmed, a journalist with a leading Hindi news channel who covered Patna rally, says that Muslim religious issues have been given on a platter to BJP by Muslim religious organisations like All India India Muslim Personal Law Board. “And BJP is using these issues for its political gain. When the triple talaq case was in the Supreme Court, the AIMPLB had been asking for a parliamentary legislation instead of a judicial interference. And now when the BJP has introduced a bill in Parliament, they are crying foul. No doubt, criminalising triple talaq and introduction of Uniform Civil Code will deeply hurt the sentiments of the community and it will mobilise against BJP. But, this is exactly what the BJP wants,” says Ahmed.

Afroz Alam, head of the Political Science Department at Maulana Azad National Urdu University, says that Muslims must realise that they are living in an intensely politicised India.

“It is a time when Muslims are being trivialised in the overall electoral scheme of the country. This is despite their broad electoral presence. It is largely because of the idea of ‘Hindu vote’ becoming more pronounced against the misplaced notion of ‘Muslim vote’. We must remember that Muslim identity is the touchstone on which the Hindu identity is forged. Thankfully, the ‘monolith’ and ‘appeasement’ agenda got demolished in the 2014 Lok Sabha and subsequent Assembly elections. We have witnessed that the numeric advantages of Muslim voters lose its weight due to the divided Muslim loyalty and competing claims of multiple parties and candidates over Muslim votes. Be that as it may, the possible alignment of Bahujans and other non-BJP parties in their respective states in 2019 will not only give effective challenge to BJP but will also turn Muslims into salient voters,” says Alam.

Some analysts believe that Muslims don’t adopt one single strategy to vote and remain divided among many political parties. M. Reyaz, assistant professor at Aliyah University, says that Muslims are not a homogenous society and thus there is no one-way track of their voting.

“Voting pattern of Muslims vary from state to state. In states of South India, where BJP is still not a major party, the pattern is completely different. In Hindi belt or states where BJP is in power, the unanimous strategy is to vote against the saffron party for obvious reasons. But otherwise Muslim votes are fragmented among major so called secular parties,” said Reyaz.

If there was a Muslim vote ever, adds Reyaz, as it was said to be in 2014 in the midst of the Modi wave, it would not have divided among parties like Congress, SP and BSP in Uttar Pradesh.

Like Hindu community, caste or biradari divisions among Muslims too play a part in determining their electoral choices. In recent years, significant assertion by pasmanda (backwards) sections among Muslims on social and political level has been observed. Peace Party, a party primarily of julahas (weaver) classes, played a significant role in the victory of SP candidate in last month’s Gorakhpur Lok Sabha by-election.

Pasmanda sections constitute the majority of votes among Muslim electorate.

Khalid Anis Ansari, director of Dr Ambedkar Centre for Exclusion Studies and Transformative Action, Glocal University, is keenly tracking the trajectory of pasmanada movements. He suggests that these sections will position their loyalties towards political groups that will promise their empowerment.

“In UP, if the alliance between SP and BSP is struck in time, then most pasmanda votes are likely to be inclined towards the alliance. However, having said that, PM Narendra Modi’s acknowledgement of the pasmanda category in the Orissa conclave last year, UP CM Yogi Adityanath’s recent mooting of quota for atipichda (Most Backward Classes or MBC) and mahadalit sections, and the constant work of the BJP’s ‘weavers cell’ among the pasmanda Muslims in UP since 2013 must not be taken lightly. In a closely contested and mediatised election, it is often the form rather than the content that matters. The UP BJP may want to replicate Nitish Kumar’s Bihar experiment in 2005 state elections where he vanquished Lalu Prasad Yadav’s RJD by employing the ‘MBC/mahadalit/pasmanda’ formula in opposition to RJD’s ‘Muslim-Yadav’ alliance. If BJP clears the MBC quota, then a majority of pasmanda castes stand to gain by being included in the MBC category.

“As far as Bihar is concerned, Nitish Kumar’s JD (U) is at its lowest ebb and the exit of Sharad Yadav and Ali Anwar Ansari have made a huge symbolic dent. The pasmanda vote is most likely to remain divided there between RJD and JDU with the former bagging the larger share this time,” says Ansari.

Ansari’s pasmanda observation is shared by Rakesh Kushwaha, a social activist from East UP, who recently toured extensively in almost all districts of UP and Bihar to gauge mood of OBCs, dalits and Muslims.

Kushwaha has seen mounting anger among these sections against the BJP government in the centre.

“You can visit any area in these two states, you will find support for BJP depleting fast. Moreover, people are aghast the way this government has functioned over the last four years. They say they encounter new problem every month. If elections are held today, BJP will not be able to garner even 100 Lok Sabha seats. Among Muslims, anger is palpable. I only hope that the Opposition will be united and able to tap resentment of dalits, OBCs and Muslims in 2019. That’s the key,” said Kushwaha.