The defence spokesperson said that the identity of the slain men is being ascertained. 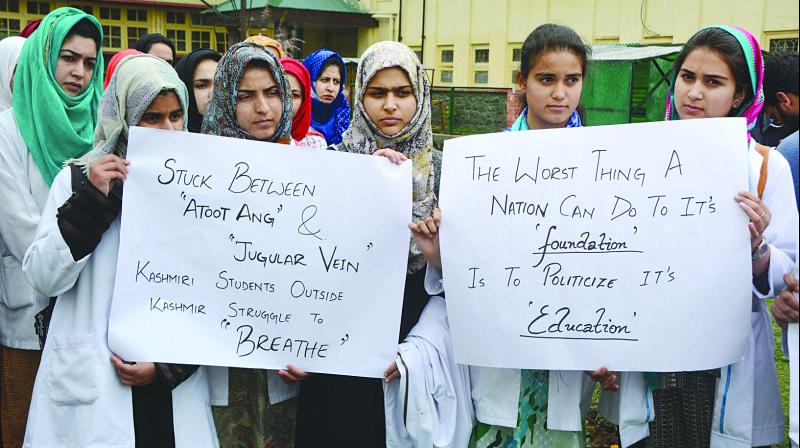 Medical students take out a silent protest at SMHS hospital in Srinagar on Saturday against police action on students in Pulwama. (Photo: PTI)

Srinagar: Two militants were shot dead by security forces during a brief encounter in Chadoora area outside Jammu and Kashmir’s summer capital Srinagar on Saturday evening.

Defence spokesperson Colonel Rajesh Kalia confirmed the incident and said that two AK-47 assault rifles with some ammunition were found on the slain militants. “No injuries to own troops. The operation is over,” he said.

The police sources said that the fire fight broke out during a “cordon-and-search operation” in Hayatpora village of Chadoora in the central district of Budgam. The militant duo holed up in the area had tried to escape through an orchard after jumping the boundary wall of a house, not realising that the entire area had been cordoned by the troops. The operation was launched by J&K police’s counterinsurgency Special Operations Group (SOG), the Army’s 53 Rashtriya Rifles and the CRPF on a tip off about the presence of militants in the area, the sources said. However, another report said that the militants opened fire on a patrol party of Army’s 53 Rashtriya Rifles but were killed in retaliatory fire.

The defence spokesperson said that the identity of the slain men is being ascertained.

The locals have said that they believe that one of them is Younis Maqbool Ganai, a resident of Chadoora’s Patrigam village.

Latest reports from Chadoora said that street protests broke out in the area soon after the clash. The locals have alleged that the troops beat up drivers of public transport and private vehicles while making way to Hayatpora.