Quick-reaction teams will now escort the UP CM at all times and secure his residence, office. 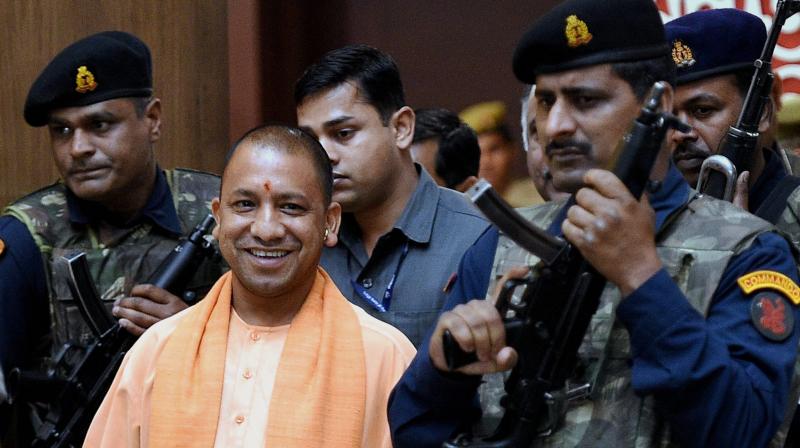 Lucknow: Uttar Pradesh chief minister Yogi Adityanath’s security was upgraded and the state was put on alert on Saturday following intelligence inputs that about two dozen terrorists posing as saffron-clad saints could target religious sites and other public places.

Officials said the terrorists — trained by Pakistan’s spy agency ISI — have entered UP via Nepal. State DGP Sulkhan Singh told reporters that the police is equipped to deal with any situation.

The alert shared by the Madhya Pradesh police comes about a month after Mr Adityanath took over as UP’s CM on the back of fiery anti-Muslim rhetoric. It also comes two days after security agencies busted a suspected module of the terror outfit ISIS.

Following the alert, quick-reaction teams (QRTs) will escort the CM at all times and secure his residence and office.

The saffron-robed 44-year-old has been requested not to meet any visitor not frisked by security personnel. Entry to his residence has been further restricted. People will be thoroughly frisked before being allowed to participate in the daily Janata Darshan of the shaven-headed priest-politician.

“We have been informed that these militants have learnt local dialects and accent, and can recite from scriptures, even the Gayatri Mantra for access to places that VIPs frequent,” said a senior police official.

The police said that the ISIS suspects arrested recently from UP had been living in rented houses, posing as tilak-wearing Hindus.

Security was being upgraded at religious places — including Ayodhya, Kashi and Mathura — and also at vital installations, including airports, bus and railway stations, besides the state Assembly and Lok Bhavan, UP’s new seat of power.

Special security measures were being taken for the Gorakhnath temple of which the CM is the spiritual head. Special police teams with sniffer dogs and metal detectors were being deployed to regulate entry into the temple area.

Police officials have been directed to mobilise local intelligence sources and track those seen asserting their Hindu identity. The terrorists may even pose as tantriks to escape police scrutiny, officials said.

Later in the evening, UP ATS IG Aseem Arun however told news agency ANI that the “hype is unnecessary” and that the security agencies are always on alert.