The government is also likely to give a comparatively analysis of the NDA three years with the UPA-2 tenure. 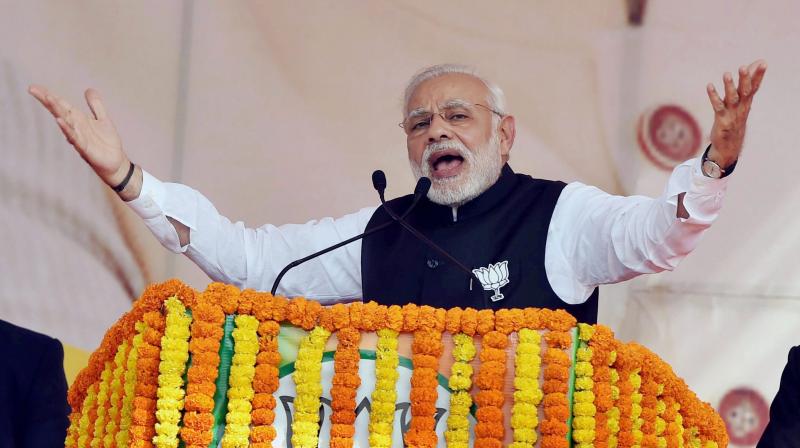 New Delhi: The Narendra Modi government plans to celebrate its three year anniversary by highlighting surgical strikes and demonetisation as its major achievements. There will be multiple campaigns projecting a total of 90 initiatives, policies and schemes introduced by the BJP government as it completes three years in power on May 26.

Interestingly, surgical strikes and demonetisation have been shortlisted as the top focus as they are believed to have left the most impact on citizens, sources stated.

Each ministry has been asked to submit a list of five achievements or people-centric policies that have been initiated by it during the past three years. The government is also likely to give a comparatively analysis of the NDA three years with the UPA-2 tenure.

The overdrive towards people contact programme comes at a time when the NDA regime has already started preparing for the 2019 Lok Sabha polls. Other success stories like passing of the GST Bill and Digitial India, “people-centric” policies like Beti Bachao Beti Padhao, Jan Dhan Yojna, Kisan credit card, Swachcha Bharat Abhiyaan and Make in India and many more of national concern are also likely to be brought before the people.

Sources stated that Doordarshan, Press Information Bureau, Directorate of Audio Visual Publicity and Directorate of Field Publicity will be roped in for wide coverage and awareness generation during the period.

It is understood that senior ministers and Members of Parliament from the party will be mandated with reaching out to the electorate through panchayats and local elected bodies to gain maximum impact of the move, sources added.

It is learnt that the PMO is directly monitoring the entire exercise wherein the ministries will be reaching out to the people and spread awareness regarding the people-centric policies of the government.

The campaign is to be launched soon and the preparation for the same has already been initiated at several levels within the government. As part of the campaign, jingles and advertisements for radio and television will be prepared. A similar plan for print and social media is also being prepared, sources added.