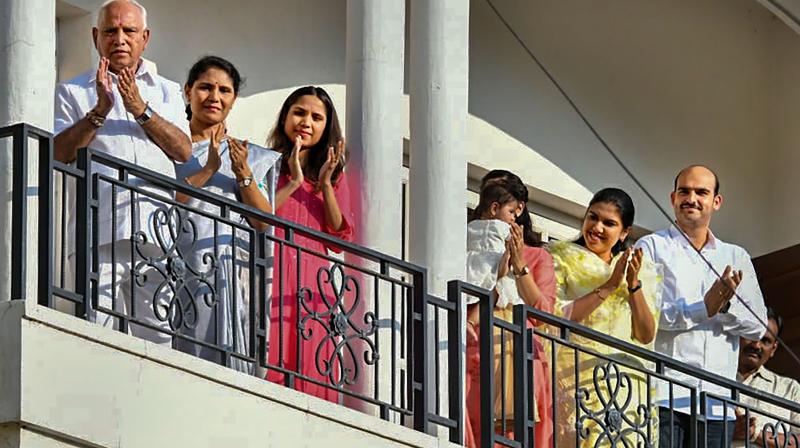 Bengaluru: The Karnataka government decided late this evening to extend its coronavirus lockout to the entire state till March 31.

Earlier, it had imposed prohibitory orders in nine districts where COVID-19 positive cases have been reported.

The decision to extend the shutdown to the whole state came after the health task force expressed fears that the virus has entered many more districts.

In places like Bengaluru, it might have entered stage three, that is, spreading within the community rather than remaining within the foreign-returned population.

The tougher measures include total suspension of all but the most essential services.

Groceries will be open, as will online food delivery services like Swiggy and Zomato. But  all forms of transport have been shut down, and Section 144 has been imposed against assembly of more than five people.

The Bengaluru police have said they will intervene if anyone is found violating prohibitory orders, and have set up a special team to track down foreign-returned people to see if they are violating isolation norms.

Earlier in the day, chief minister Yediyurappa held a meeting with various experts and appealed to people living in cities not to leave for their home towns lest they spread the virus there.

He also requested experts, doctors and owners of private hospitals to pitch in with the effort to contain the infection.

Yediyurappa added that experts, doctors and owners of private hospitals have advised him to order a "complete shutdown," besides setting up fever clinics where preliminary check-ups can be done.

"Thirty fever clinics will be started," he said in response to a question.

Answering another question, Yediyurappa added that in the wake of the shutdown food would be provided to dailywagers free of cost through Indira Canteens. "The state-sponsored subsidised 'Indira Canteens' as of now serves breakfast at Rs 5 and lunch and dinner at a cost of Rs 10. In the interest of the poor, it has been decided to serve free food for poor. Through Indira Canteens, free food will be served for the entire day to the poor," he said.

With seven new COVID-19 cases confirmed in Karnataka, the total number of coronavirus infections has risen to 33. This was the highest increase in a single day in the state.

With the coronavirus scare growing more intense, the Karnatka High Court ordered closure of all district, trial, family and labour courts and in the state from March 24 to April 6 (both days included).

According to a communiqué released by the Karnataka High Court, there will be maximum one or two designated in-charge courts in all district headquarters which will function between 11 am to 12:30 pm on March 24, 27, and 31 and April 2.

The note further added that cases listed till April 4 will automatically be adjourned for next hearing date and these in-charge courts will take only very urgent matters like bail petitions. Besides this, the court has also restricted the entry of its own bar members, advocate-clerks and litigants. The entry of advocates, staff members and litigants should enter the court premises only unless it is absolutely mandatory.