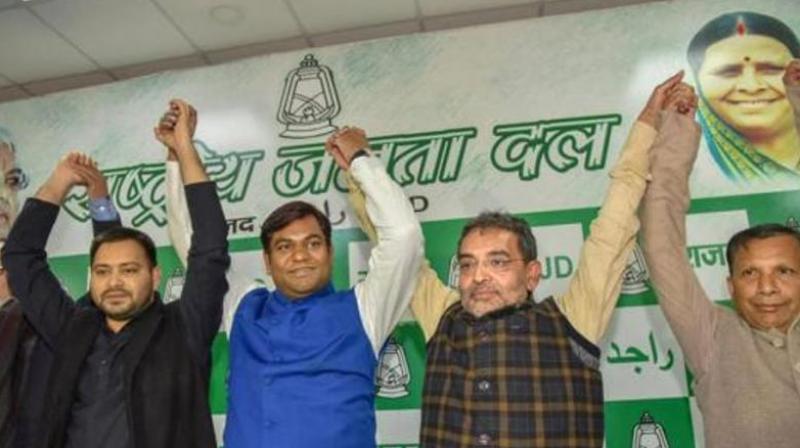 Patna: After days of discussions, the six-party Opposition grand alliance or Mahagathbandhan in Bihar on Friday announced its seat-sharing formula for the 40 Lok Sabha seats, half of which will be fought by Lalu Prasad Yadav’s RJD and nine by the Congress.

According to the agreement, the Upendra Kushwaha-led Rashtriya Lok Samta Party (RLSP) will put up candidates in five seats, the Jitan Ram Manjhi-led Hindustani Awam Morcha (HAM) and the Mukesh Sahani-led Vikassheel Insan Party (VIP) in three each and the RJD will give one seat out of its quota to the Communist Party of India-Marxist Leninist (CPI-ML).

No seats were given to the CPI and CPI-M, making it clear that former JNU students’ union president Kanhaiya Kumar, who is contesting from Begusarai, will not be supported by the grand alliance.

After the announcement, RJD spokesperson Manoj Jha said, “This alliance has been formed to serve people and save the Constitution.”

Sources said to pacify the Congress, which got nine seats despite a demand for 11 seats, it was decided that a party candidate will be nominated for a Rajya Sabha from Bihar. In 2014, the Congress had won just one seat while the RJD had won four.

The BJP-led NDA has already announced its seat sharing arrangement, according to which Janata Dal-United (JD-U) and the BJP will contest 17 seats each and the Lok Janshakti Party (LJP), led by Ram Vilas Paswan, six seats. The current NDA constituents had won 30 out of the 40 seats in 2014.

Names of grand alliance candidates for the first phase of polling on April 11 were also announced. Of the four seats in the first phase, the HAM has been given two seats — Gaya and Aurangabad. Mr Manjhi himself will be contesting from Gaya.

RLSP candidate Bhudeo Chaudhary has been fielded from Jamui which is currently held by LJP’s Chirag Paswan.

The other prominent candidates in the list are HAM’s Upendra Prasad from Aurangabad and RJD’s Vibha Devi, whose husband Raj Vallabh Yadav was recently disqualified from the Assembly following conviction in a rape case, from Nawada.

Earlier in the day, reports suggest that RLSP chief Kushwaha, who had walked out of the NDA following an offer of only two seats, was upset with five seats offered to his party in the grand alliance.

Sources said he wanted around six seats but his demand was turned down during the meeting because other parties were also demanding a respectable seat share. The RLSP had won three seats in 2014.

The biggest gainer was, surprisingly, the fledgling VIP, which was floated by former Bollywood set designer Mukesh Sahni less than six months ago. It got three seats to contest.