Stunning works of art up for a cause

Mica paintings are considered precious because they constitute a visual social history of 19th century life in India by Indians. 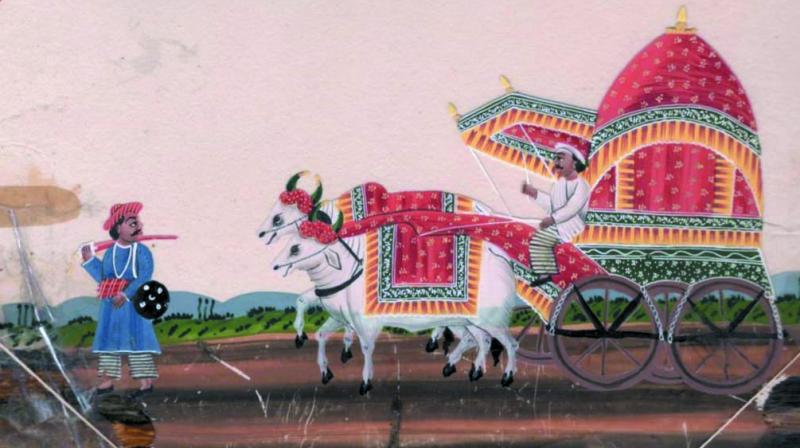 A set of eight paintings on frorms of transport.

If you are an art collector, you must visit Union minister for women and child development Maneka Sanjay Gandhi’s residence on 14 Ashoka Road in New Delhi soon. On display are precious miniature mica paintings, dating back to the 19th century, that the minister has, most reluctantly, put up for sale. And of the total 212, 14 got sold in the first two days itself.

Popularly called Mica Paintings, their cost ranges from Rs 35,000 a piece to Rs 7.5 lakh for a set of seven. The revenue generated from the sales will be used to build a hospital for animals in Raipur, Chhattisgarh.

Extremely rare today (only 7,000 such paintings exist all over the world), Mica Paintings were very common during the 19th century and represented the Company School of Painting. These were commissioned by European patrons and executed by Indian artists and served as Indian souvenirs in Europe.

Created on transparent sheets of mica, the paintings on sale depict Hindu gods and goddesses, different castes, occupations, modes of transport, religious events and flora and fauna of the subcontinent.

The collection includes a beautiful painting of a woman peeking from behind the curtain of a wagon, while another one shows rich men parading on a bejewelled elephant. Still another depicts a scholar clutching the tools of his trade. Though usually produced in thematic sets, many are single pieces as well.

Found throughout south India and Bihar, mica is a transparent mineral which is formed between the strata of granite. Due to the excess of heat and pressure between layers of rock, mica gets a transparent look. But one sheet of mica comprises many interlocking platelets, resulting in a laminar structure which can be split easily into thin sheets. And it is these thin sheets that are used for making stunning works of art.

In earlier times, mica was widely used for paintings as it is extremely smooth and paint sits on it without sinking in, making the colours very intense, and the paintings very appealing to the eye. And this is also the reason as to why even old paintings look fresh to the eye. The colours used for making these art works were mixed with varying quantities of binding medium and thickly applied with a brush. In a few paintings, both front and back surface of the mica sheet has been painted to increase its opacity; the artwork is then done on it.

Being brittle, mica is also prone to breakage and needs elaborate preservation techniques, something the Victoria and Albert Museum in London does very well. This museum has over 700 mica paintings from Murshidabad, Patna, Banaras and Tiruchirappalli that are remarkably intact unlike many others in India in which either the paint has flaked off or got discoloured.

Mica paintings are considered precious because they constitute a visual social history of 19th century life in India by Indians. Over the years, many of these precious works have got damaged and perished due to lack of care. Mica sheets can tear or flake off if not handled properly.

So if you happen to own one of these rare works, never place your fingers on the painted sections of the picture. It is best to get the paintings professionally mounted so that its handling is reduced to a minimum.

Discolouration or darkening of the surface is a result of pollution. Such works have to be treated professionally so that the process is reversed. And to ensure the paintings do not get damaged in view of high pollution levels, they must be protected from the front and the back, especially if you are putting them on the wall.

Just the usual hardboard back is not enough to protect these paintings. A better idea is to have good quality glass placed in front and behind the painting, that too with matting. Additionally, the back side should also have an acid-proof thick sheet of paper or cardboard. This helps protect it better. Besides, these paintings should never be put on a damp wall.

In case you have no choice, make sure you use rubber bushes which can be screwed or fixed to the back with glue so that there is air space between the painting and the wall. Matte board on which the painting is mounted must be made of acid free paper to ensure the chemicals leaching through the matting do not discolour the painting. Additionally, acid-free corner pockets and adhesives must be used for framing the paintings. If there is paint extending to the end of the painting, acid free adhesives are a good option instead of corner pockets.

For storage, it is best not to stack these paintings one over the other. Instead use acid-free paper between two paintings and then put them in acid-free boxes. Store the paintings vertically in a box so that there is no pressure on them.

Maneka Sanjay Gandhi, Union minister for women and child development and People For Animals (PFA) chairman, talks about the mica paintings she is selling to build a hospital for animals in Raipur, Chhattisgarh:

How do you feel selling these prized possessions? Did you try selling them to a museum so that general public can view them and they are, perhaps, better taken care of? Now these are going into private collections...
I first tried selling them to the National Museum but they have stopped buying anything from 1996. I am still saying that collectors should pick them up all together so that the collection stays intact since it is so rare. But at the end of the day, I am selling it to construct a hospital.

Where are these paintings from?
These paintings have an interesting background. They were made in Murshidabad initially. Then, after the Battle of Plassey, the makers moved to Patna and made them for the British garrisons there. Many British people used to go to Banaras as it was known for “exotic” sights and so a small group started selling these as souvenirs of local life to the tourists. One group moved to Tiruchirapalli where mica was mined and started it there. They were sold in “fikras” or booklets. Over the centuries, these fikras have been broken up and sold individually. All of them were only available in England. The Victoria and Albert Museum has 750 of them. It takes years to collect as only one or two are in circulation in the market at a time. In any case, there are such few pieces that have survived. They depict life at that time — the castes, trades, festivals, gods, amusement, flora and fauna.

When did you start collecting mica paintings?
Some time ago.

Do you think the funds generated from selling these paintings will be sufficient for the construction of the hospital?
It would certainly help. People For Animals (PFA) has 36 hospitals and we constantly need help as government offers none. These are free hospitals and service the community animals. The one in Delhi — Sanjay Gandhi Animal Care Centre — has 6,000 animals because the Delhi government does not have a single rescue centre.