India   All India  23 Mar 2018  How the Mahatma tried to save Bhagat Singh’s life
India, All India

How the Mahatma tried to save Bhagat Singh’s life

Bhagat Singh, Rajguru and Sukhdev were hanged to death on March 23, 1931. 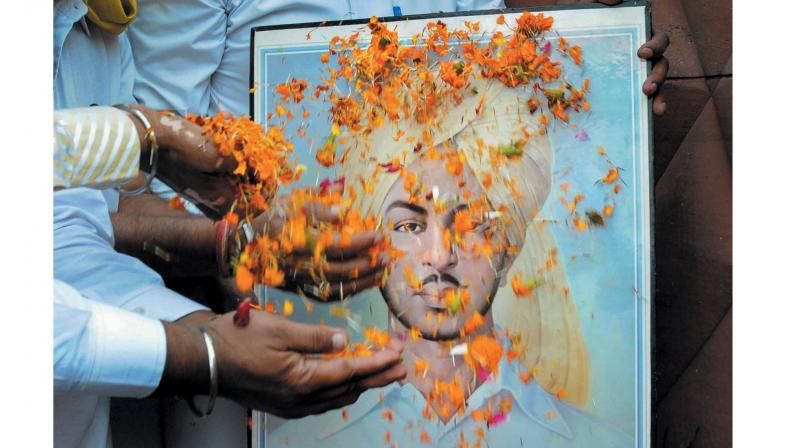 Today is the 87th anniversary of the martyrdom of Shaheed Bhagat Singh, the revolutionary icon of the freedom struggle, who attained martyrdom at the young age of 23.

By the time Bhagat Singh attained national eminence in the late 1920s and early ’30s, the Indian National Congress had the country under its spell with the Non-cooperation movement launched by Gandhiji in 1920/21 that was entering its second phase after Pandit Jawaharlal Nehru declared Poorna Swaraj as the goal of the Congress at Lahore in December 1929. The non-violent path of the party leading the struggle for freedom was totally opposed to the ways of Bhagat Singh, Chandra Shekhar Azad, Jatin Das, Khudiram Bose, Udham Singh, Madan Lal Dhingra and many other revolutionaries. The goal, however, was the same: political and economic freedom of the masses. In this article while paying tributes to Bhagat Singh and his comrades we highlight the deep sympathy and concern of the Congress leaders of freedom movement for the brave revolutionaries who will continue to inspire the nation for generations to come.

The year 1928 was marked by the anti-Simon Commision upsurge in India. On October 30, 1928, the Simon Commission faced a large hostile crowd led by Lala Lajpat Rai at Lahore station. The Lala was severely beaten by a British sergeant named Saunders and later succumbed to his head injury. The whole nation was stunned by this savagery. Bhagat Singh was appalled. He could not believe that a white man could dare take a stick in hand and set upon Lajpat Rai. The Hindustan Socialist Republican Association (HSRA) decided to undertake retaliatory action. On December 17, Bhagat Singh, Rajguru, Sukhdev and Chandra Shekhar Azad mistook Scot for Saunders, as they pounced upon him and shot him.

As news of the attack on Lajpat Rai spread, the country reacted with anger. Nehru asked the British to take concrete steps to atone for the insult to the nation. He described the savage treatment meted out to Lajpat Rai as a national humiliation. Nehru writes in his autobiography:

“It was this sense of national humiliation that weighed on the mind of India, and when Lalaji’s death came soon after, inevitably it was connected with the assault, and sorrow itself gave pride of place to anger and indignation. It is well to appreciate this, for only so can we have some understanding of subsequent events, of the phenomenon of Bhagat Singh, and of his sudden and amazing popularity of North India... Bhagat Singh thus did not become popular because of his act of terrorism, but because he seemed to vindicate, for the moment, the honour of Lala Lajpat Rai, and through him of the nation. He became a symbol; the act was forgotten, the symbol remained, and within few months each town and village of Punjab, and to a lesser extent in the rest of northern India, resounded with his name. Innumerable songs grew up about him, and the popularity that the man achieved was something amazing.”

Bhagat Singh and Batukeshwar Dutt threw a bomb in the Central Legislative Assembly Hall in Delhi on April 8, 1929, when Sir George Schuster told the House about the Viceroy’s ruling on the public safety bill. It was hurled from the midst of the packed gallery, not aimed at anybody, but to draw the attention of the House, the Indian people and the British rulers in India. This was immediately followed by the distribution of the “red pamphlet” which declared in clear terms the objective of the revolutionaries.

As Bhagat Singh and Batukeshwar Dutt had planned not to escape after throwing the bomb, they were arrested. But Saunders’ murder trial took precedence over the Assembly bomb case. While in jail, Bhagat Singh took up the cause of bettering jail conditions and commenced a hunger strike. As the fast continued indefinitely with no solution in sight, Nehru visited Bhagat Singh and the other hunger strikers in jail.

Bhagat Singh, Rajguru and Sukhdev were hanged to death on March 23, 1931. As the news of Bhagat Singh’s execution spread, the nation went into mourning. There were processions throughout the country. Many went without food. People wore black badges and shut down their businesses to express their grief. The British stayed indoors. Among the Indian political leaders, Nehru was the first to pay his tributes. He said: “Bhagat Singh was a clean fighter who faced the enemy in an open field. He was a young boy full of passionate zeal for the country. He was like a spark that grew into a great flame in a short time and spread from one city of the country to the other, illumining the darkness everywhere.”

A pall of gloom hung over the Motilal Nehru pandal at the annual Congress Party session in Karachi. When the session was scheduled for March 29, 1931, nobody had an inkling that Bhagat Singh, Sukhdev and Rajguru would be hanged six days ahead of schedule. A procession to be led by President-elect Sardar Vallabhbhai Patel was abandoned in grief. Reception Committee chairman Choithram P. Gidwani said in a welcome speech that the tragic news had “plunged the whole country in sorrow and indignation”. The public was desolate. It had expected that the lives of its heroes would be spared. This was natural in the wake of the Gandhi-Irwin Pact and the reconciliation between the Government of India and the Congress.

Subhas Chandra Bose had told Gandhiji that they should, if necessary, break with the Viceroy on the question of Bhagat Singh and his two comrades. “Because the execution was against the spirit, if the letter, of the Delhi pact.” Still, Netaji added: “It must be admitted that he (Gandhi) did try his very best.” Gandhi’s secretary Mahadev Desai also quoted the Mahatma as saying in Gujarati: “I was not here to defend myself and hence I have not placed the facts as to what I have done to save Bhagat Singh and his comrades. I have tried to persuade the Viceroy with all the methods of persuasion I had. After my last meeting with the relatives of Bhagat Singh, on the appointed date, that is, 23rd morning, I wrote a personal letter to the Viceroy, in which I had poured in my whole being — heart and soul — but it has all gone in vain... Pujya Pandit Malaviyaji and Dr Sapru also did their utmost.”

Jawaharlal Nehru sponsored a resolution which was seconded by Madan Mohan Malviya. The resolution said:

“This Congress while dissociating itself from and disapproving of political violence in any shape or form, places on record its admiration of the bravery and sacrifice of the late Sardar Bhagat Singh and his comrades, Sukhdev and Rajguru, and mourns and the bereaved families the loss of these lives. This Congress is of the opinion that this triple execution is an act of wanton vengeance and is a deliberate flouting of the unanimous demand of the nation for commutation. This Congress is further of the opinion that the government has lost the golden opportunity of promoting goodwill essential at this juncture and of winning over to the method of peace the party, which being driven to despair, resorts to political violence.”

According to historian S. Irfan Habib: “Bhagat Singh saw the emergence of Pandit Jawaharlal Nehru and Subhas Chandra Bose as a redeeming feature of the freedom struggle during the 1920s. In an article he wrote shortly before his death, the Shaheed-E-Azam observed ‘they should aim at a Swaraj for the masses based on socialism. That was a revolutionary change which they could not bring about without revolutionary methods...’ Bhagat Singh concludes his piece with an exhortation to Punjab’s youth to follow Nehru.”

If Bhagat Singh became a legend in his lifetime, the immense popularity of Nehru and Netaji in the early 1930s can be gauged from the fact that they were the icons of Bhagat Singh and millions of young Indians.

The writer, an ex-Army officer and a former member of the National Commission on Minorities, is a New Delhi-based political analyst