Ayodhya dispute: SC to examine if 1994 ruling on mosque needs to be revisited 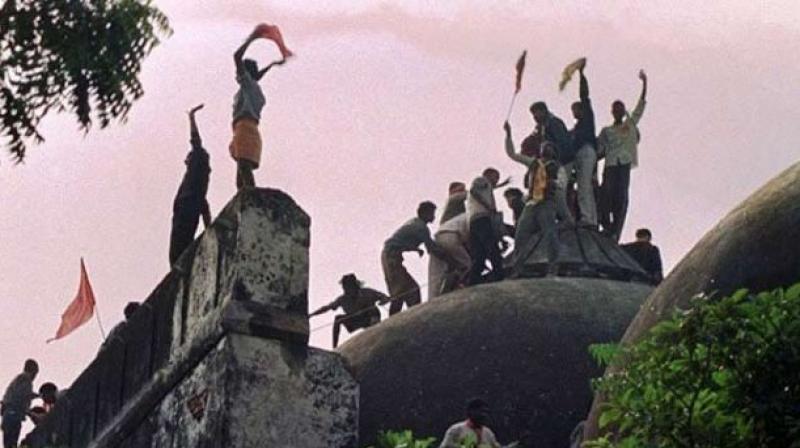 Stressing the need for relook at the 1994 verdict, senior counsel Dhavan contended that a mosque enjoys a particular position in Muslim Law. (Photo: File)

New Delhi: The Supreme Court on Friday reiterated that before deciding the Ayodhya title dispute, it will examine whether the 1994 ruling, viz “a mosque is not an essential part of the practice of the religion of Islam and Namaz (Prayer) by Muslims can be offered anywhere, even in open” requires to be revisited by a five judge Constitution bench.

A three-judge Bench of Chief Justice Dipak Misra and Justices Ashok Bhushan and Abdul Nazeer agreed to examine this as a preliminary issue after senior counsel Rajeev Dhavan, appearing for one of the Muslim parties submitted that the 1994 verdict was wrong and required reconsideration.

During the last hearing the court asked Dhavan to argue the propositions of law, which required to be considered by the court for reference to a larger bench.

On Friday even as Dhavan pleaded for revisiting the 1994 verdict, the CJI made it clear to Dhavan “if we agree with your propositions, we will refer the legal principles to be considered afresh by a five judge bench. If we don’t agree with your argument and come to the conclusion that the 1994 observations were made in the context of acquisition of land in Ayodhya, we may not refer it.”

Earlier in a brief submission, senior counsel K Parasaran and CS Vaidynathan opposed revisiting the 1994 verdict on the ground that the observations in this case had no relevance in deciding the title suits.

Revisiting the 1994 judgment again would amount to review, which is not permissible.

Further the observations made in 1994 judgment were in the context of acquisition and has nothing to do with the secular character.

Stressing the need for relook at the 1994 verdict, Dhavan contended that a mosque enjoys a particular position in Muslim Law and once a mosque is established and prayers are offered in such a mosque, the same remains for all time to come as a property of Allah and the same never reverts back to the donor or founder of the mosque and any person professing Islamic faith can offer prayer in such a mosque and even if the structure is demolished, the place remains the same where the Namaz can be offered.

Counsel faulted the finding that Ayodhya is said to be of particular significance to the Hindus as a place of pilgrimage because of the ancient belief that Lord Rama was born there, whereas the mosque was of significance for the Muslim community as an ancient mosque built by Mir Baqi in 1528 AD This indicates the comparative significance of the disputed site to the two communities, the court said while ordering `status quo’ on worship by Hindus. He said when religious practices are common to all religions, reading down religion of Islam and raising the status of Hindus by way of comparative significance cannot be accepted.

Dhavan pointed out that the 1994 verdict ordering `status quo’ on installation of Ram Idol in the disputed site, recognised Hindus right to worship at that place but completely ignored the rights of Muslims to offer namaz in the Babri Masjid.

The observation that a mosque is not an essential part of the practice of the religion of Islam and Namaz (Prayer) by Muslims can be offered anywhere, even in open, required to be revisited as the Allahabad High Court while deciding the title suit in 2010 had apportioned one third of the land to Hindus, one third to Muslims and one third to Ram Lulla relying on the status quo order of 1994.

Dhavan described the Babri Masjid demolition as a “barbaric act”.

The mosque was desecrated and Ram idol was installed inside a mosque and this court has granted protection to that idol, which could never be accepted.

He will continue his arguments for reconsideration of the 1994 verdict on April 6.