The party workers also shouted slogans and sought action against the babus who assaulted AAP MLAs inside the Delhi Secretariat. 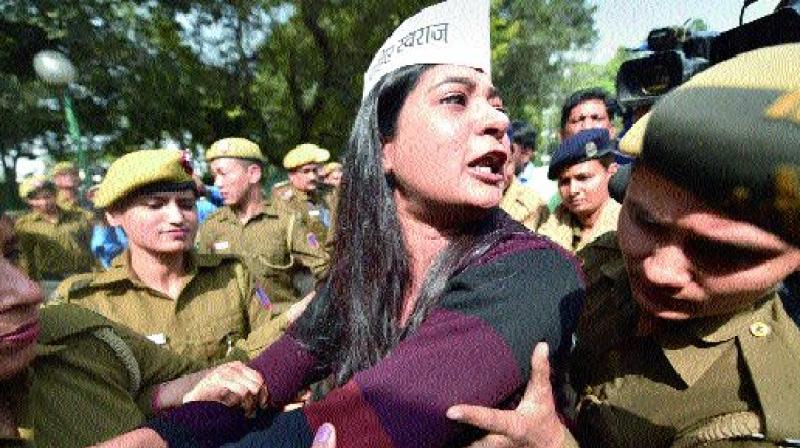 New Delhi: Aam Aadmi Party (AAP) workers staged a protest of their own outside Union home minister Rajnath Singh’s residence on Thursday morning after he condemned the alleged assault on chief secretary Anshu Prakash, who was beaten up by two AAP legislators in the presence of Arvind Kejriwal at the chief minister’s residence on Monday night.

The party workers also shouted slogans and sought action against the babus who assaulted AAP MLAs inside the Delhi Secretariat. AAP minister Rajendra Pal Gautam was detained along with five legislators including Girish Saini, Fateh Singh, Anil Vajpayee, Rakhi Bidlan, and Ajay Dutt among others.

“On Thursday, MLAs and workers of AAP had given a call of gherao and protest outside the residence of hon’ble home minister of India at Akbar Road. As the area is under prohibitory orders (Section 144 of the CrPC), 89 persons were detained under the DP Act. Also, six AAP counsellors were among the detained persons. The detained were later released,” a Delhi police official said.

This came two days after the AAP legislator of Ambedkar Nagar, Ajay Dutt, filed a police complaint against Mr Prakash for the remarks he made during the emergency meeting at Mr Kejriwal’s residence on Monday night. A party official said the protest was also called against the “biased inquiry” made by the Delhi police against AAP legislators Amanatullah Khan and Prakash Jarwal, who were taken into judicial custody, on Wednesday, for allegedly assaulting the chief secretary. Reportedly, AAP minister Imran Hussain was manhandled at the Delhi Secretariat by a crowd protesting against the alleged assault. According to multiple video clips, his personal secretary Himanshu Singh was also beaten up.