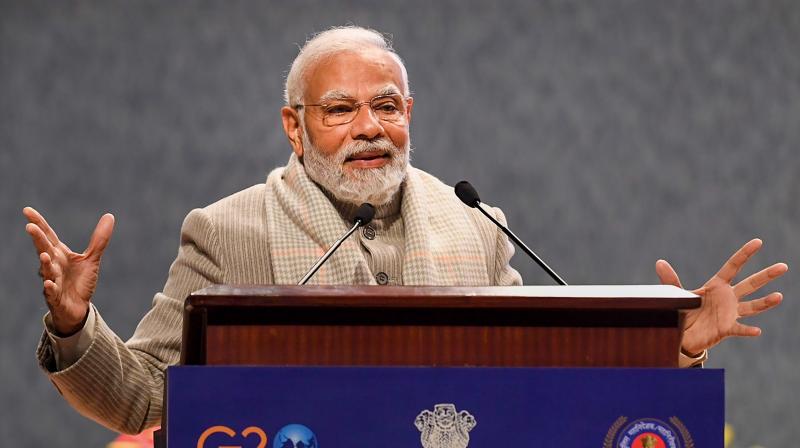 New Delhi: Prime Minister Narendra Modi on Sunday asked the top police brass to make the police forces more sensitive and train them in emerging technologies. The PM’s emphasis came during his interactions with the director generals of police and inspector generals of police of the state and Union territories during the three-day conference organised by the Intelligence Bureau here.

The Prime Minister emphasised on the importance of the National Data Governance Framework for smoothening of data exchange across agencies, the government said in a statement.

The PM also sought enhanced cooperation between the state police and the Central agencies. Addressing the 57th All India Conference of Director Generals and Inspector Generals of Police, Mr Modi recommended repealing obsolete criminal laws and sought suggestions on prison reforms and building standards for police organisations across states.

He stressed that while the agencies should further leverage technological solutions like biometrics, there is also a need to further strengthen traditional policing mechanisms like foot patrols.

The PM also discussed strengthening the border as well as coastal security by organising frequent visits by officials.

The Prime Minister called for replicating the model of DGP-IGP conferences at the state and district levels for discussing emerging challenges and evolving best practices among their teams.

The conference covered various aspects of policing and national security, including counterterrorism, counterinsurgency and cybersecurity.

"Since 2014, Mr Modi has taken a keen interest in the DGPs' conference. Unlike the symbolic presence of Prime Ministers earlier, he sits through all major sessions of the conference," a statement from the Prime Minister's Office had earlier said.

It also said that the Prime Minister not only listens patiently to all the inputs, but also encourages free and informal discussions so that new ideas can come up.

This provides a congenial atmosphere for the top police officials of the country to directly brief the Prime Minister on key policing and internal security issues, and give open and frank recommendations, the statement said.

Guided by the vision of the PM, the conference started discussions on futuristic themes in policing and security, an official said.

Topics such as security challenges along the land borders with Nepal and Myanmar, strategies to identify overstaying foreigners in India and targeting of Maoist strongholds were discussed at the three-day meet.

The conference concluded after the Prime Minister distributed police medals for distinguished service to the police officials.