India   All India  22 Dec 2020  India suspends all flights to and from UK in view of fast-spreading mutated strain of Sars-CoV-2
India, All India

The suspension of flights will be effective from midnight December 22 (Wednesday, 23.59 hours) till December 31 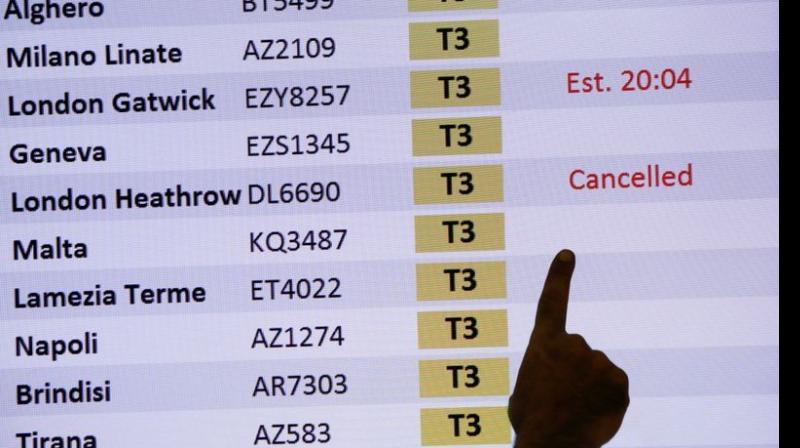 Mutation of viruses is not a new phenomenon, but its virulence bothers scientists.

New Delhi: India on Monday announced it would suspend all flights to and from the United Kingdom in view of the new, fast-spreading mutated strain of the Sars-CoV-2 (novel coronavirus) in that country. The suspension of flights will be effective from midnight December 22 (Wednesday, 23.59 hours) till December 31 (23.59 hours), the civil aviation ministry said, following a high-level meeting in the government on Monday.

“Considering the prevailing situation in the UK, Govt of India has decided that all flights originating from the UK to India to be suspended till 31st December 2020 (23.59 hours). This suspension to start w.e.f. 23.59 hours, 22nd December 2020. Consequently, flights from India to the UK shall stand temporarily suspended during the above said period,” civil aviation officials said. After the order, Air India announced that it was suspending all its flights to the UK.

Union health secretary Rajesh Bhushan said as a measure of abundant caution, all passengers coming from the UK on all international flights (including flights in transit) should be subjected to mandatory RT-PCR tests at airports upon their arrival. Those found positive will be sent to institutional quarantine centres set up by states and Union territories, while those testing negative have to be under home isolation for seven days, when they will be monitored by government health agencies. States have been asked to create separate desks at airports to facilitate the entire process.

As per present norms, international passengers had to only carry a Covid-negative certificate from a test done 72 hours prior to the journey.

India’s ban comes in line with several countries like Germany, the Netherlands, Canada, Turkey, Belgium, Italy and Israel that have already banned flights to and from the United Kingdom. The Eurostar train between Brussels and London too will stop from Monday night for at least 24 hours.

“As you are aware India has been seeing a sustained decline in the number of fresh Covid-19 cases for over two-and-a-half months now accompanied by a decline in the number of deaths. In this scenario, any interjection of a Sars-CoV-2 variant virus through passengers with a travel history could pose critical risk for pandemic management in India,” said Mr Bhushan said in a note to the civil aviation secretary.

The Maharashtra government on Monday said 14 days’ institutional quarantine was mandatory for flyers coming from Europe and the Middle East. The state has also imposed night curfew from 11 pm to 6 am from Tuesday.

According to media reports, UK health secretary Matt Hancock has warned that the new Covid-19 strain is “out of control” and suggested that parts of England will be stuck in the new, highest tier of restrictions until a vaccine is rolled out. The UK reported 35,928 new positive cases, and 326 deaths within 28 days of a positive test. “Today’s stark figures are very worrying. This will get worse before it gets better -- but it will get better. We all need to do our bit to keep the virus under control while we accelerate the vaccination programme,” Mr Hancock said as several parts of London went under a strict lockdown.

Mutation of viruses is not a new phenomenon, but its virulence bothers scientists. “Viruses do mutate. Usually, as they get transmitted, the infectiousness goes up, but the virulence or the dangerousness of the virus starts coming down,” Dr Rachna Kucheria, MD, Community Medicine, AIIMS, told NDTV.

India on Monday registered 24,337 new Covid-19 cases though the active caseload dropped to 3.03 lakh, the lowest in 161 days. As per the health ministry, India’s present active caseload is 3.02 per cent of India’s total positive cases, and the new recoveries led to a net decline of 1,705 in total active cases. The rising recoveries have also improved the recovery rate to 95.53 per cent.