In Assam, the movement is being led by many film actresses such as Prastuti Parashar, and Barsha Rani Bishaya. 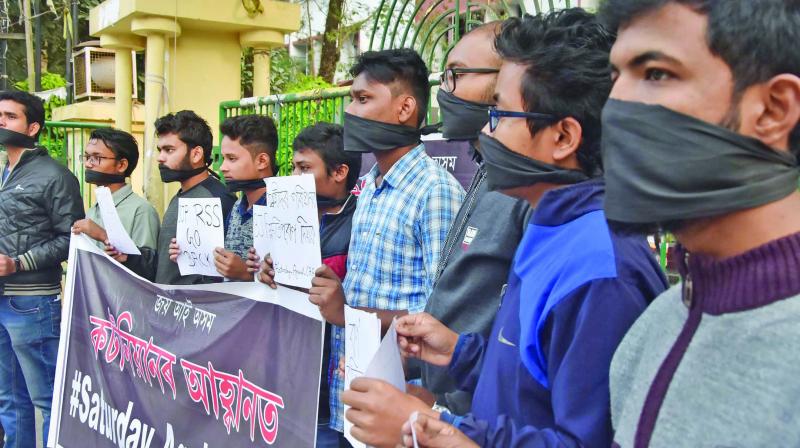 Students of Cotton University tie their mouth with black cloth as they stage a protest against the CAA in Guwahati. (Photo: PTI)

Guwahati: A large number of women came out across the state on Saturday to join the ongoing protest against the contentious citizenship act in Assam. The All Assam Students Union (AASU), which is spearheading the anti-Citizenship Amendment Act movement, on Saturday had called for a sit-in-strike and protest by women all over the state.

The central sit-in-strike was held at Latasil field in Guwahati where women from all walks of life — writers, social-activists, as well as homemakers —  joined the protest against the amended citizenship Act in a bid to protect to what they called— ‘jati, mati and bheti’ (community, land, and base) of the state.

Similar protest was organised all over the state as women came out in large number  at Lakhi-mpur, Golaghat, Dibru-garh, and Sibsagar, to join the protest and shouted slogans — “Jai Aai Axom”, “Scrap C(A)A” etc. Moreover, they also demanded justice for the five youths who were killed during police firing in the ongoing anti-CAA movement.

In Assam, the movement is being led by many film actresses such as Prastuti Parashar, and Barsha Rani Bishaya. While addressing the all women protest at Latasil field AASU chief adviser Samujjal Bhatta-charyya came down heavily on chief minister Sarbananda Sonowal while describing his stand both as misleading and ridiculous.

Referring to Mr Sono-wal’s press conference on Friday, he said that the CM openly accepted the presence of illegal Bangladeshis in Assam and also agreed to rehabilitate them in the state.

“The AASU would continue its democratic and disciplined agitation against the CAA but at the same time warn the chief minister and other leaders of the ruling dispensation not to mislead the people of Assam on issues that involves the question of our existence.”

He said that in 2004, the the government had said in Parliament that there were 1.2 crore illegal Bangladeshis in the country and 50 lakh of them were in Assam.  “It’s a government data and the chief minister cannot ignore it,” said Mr Bhattacharyya.

Coming down heavily on chief minister for deviating from his stand on implementing the Assam Accord, the students’ body leader said that agreeing to accept the illegal Bangladeshis who had entered Assam from 1971 to 2014 is the biggest violation of Assam Accord, to which Mr Sonowal has given his assent, just to protect his vote bank. He also reminded that Assam has already taken the burden of illegal Bangladeshi migrants who came in between 1951 and 1971.

“Now, there is a misleading campaign to assert that Clause VI of the Assam Accord is the soul of the tripartite agreement and other clauses can be compromised on to achieve that. We assert once again that all the clauses of the Assam Accord are for protecting the indigenous people and Clause V , which fixes the cut off date for detection and deportation of the illegal migrants is, by no means, less than Clause VI that seeks Constitutional safeguards for the indigenous communities,” said Mr Bhattacharyya while encouraging the women who came out in large number to pledge to continue the anti-CAA movement till the Act is scrapped.