Azad said that he had sneaked into the masjid around 1.30 pm on Friday, wearing a skull cap and wrapping himself in a long shawl. 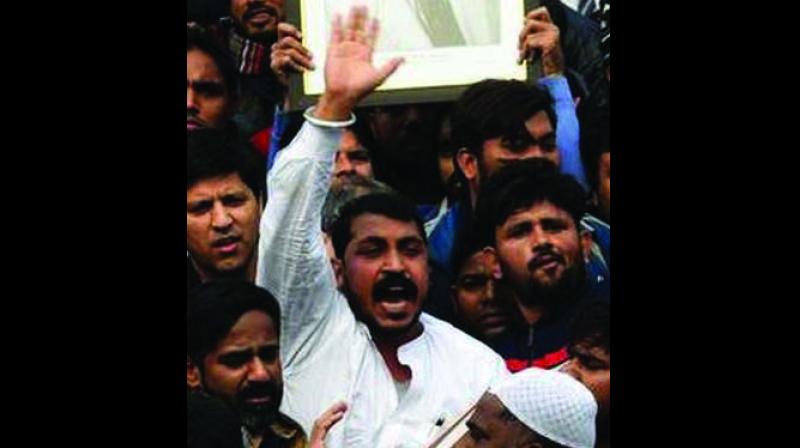 New Delhi: Bhim Army chief Chandrashekhar Azad, who had escaped from police custody on Friday, surrendered to the police at around 3.15 am on Saturday outside Jama Masjid. He was later denied bail and remanded to judicial custody for 14 days by a city court.

Though the police was on a lookout for him and there was a tight security ring outside Jama Masjid, Mr Azad said that he had sneaked into the masjid around 1.30 pm on Friday, wearing a skull cap and wrapping himself in a long shawl.

“My name is Chandrashekhar Azad. The police cannot hold me captive. I wore a cap and a shawl and entered the mosque easily,” he said.

When Mr Azad was inside Jama Masjid, the police had been sending feelers for him to come out. In the wee hours of the morning, Mr Azad stepped out and surrendered. The police initially detained him and then showed his arrest.

Before getting into the police van, Mr Azad told the crowd: “I am giving myself up to the police.”

Mr Azad sought bail from the court on the ground that there is no evidence that he instigated the Jama Masjid crowd to go to Delhi Gate where the protesters turned violent on Friday. The police opposed his bail plea on the ground that he may threaten witnesses and his judicial remand is necessary for the sake of law and order. The court dismissed his bail plea and sent him to 14 days’ judicial custody.

The police suspect he instigated the crowd, which turned violent near Delhi Gate.

On Friday, after playing hide and seek with security personnel for several hours, Mr Azad surfaced inside the mosque. He had given the Delhi Police a slip to reach the mosque.

“We have to make sacrifices so that the legislation (CAA and NRC) is taken back. We do not support violence. We were sitting inside the mosque since Friday morning and our people were not involved in violence,” Mr Azad said.

A large contingent of police had stayed put near the mosque, waiting for Mr Azad to come outside as a large number of people gathered there.

Before his surrender, Mr Azad, along with hundreds of protesters, shouted slogans and waved flags from the steps of the mosque. After being detained, Mr Azad was kept at the crime branch office in Chanakyapuri since he said he was unwell. He was later handed over to the Central district police. Following his arrest, he was taken to a hospital for medical check-up.

Mr Azad, whose name means free or independent, said his group was not involved in the violence near Delhi Gate. “Policemen dressed as civilians are instigating violence in a bid to scuttle the protests,” he alleged.

On Friday, protesters marching towards Jantar Mantar from Jama Masjid were stopped by the police and paramilitary personnel near Delhi Gate. The protest turned violent in the evening with demonstrators damaging vehicles and the police resorting to lathi-charge and the use of water cannons.

Mr Azad said protests will continue till Union home minister Amit Shah resigns and that he will soon address the protesters at Jamia Millia Islamia University. He said he had urged his supporters to carry on the protest peacefully.

“Those who are indulging in violence are not our people. Our peaceful protest continues at the historic Jama Masjid. Ambedkarites do not indulge in violence,” Mr Azad said.