Out of 230 Assembly seats in the state, Congress has secured 114, hile BJP managed to maintain its hold on 109 seats. 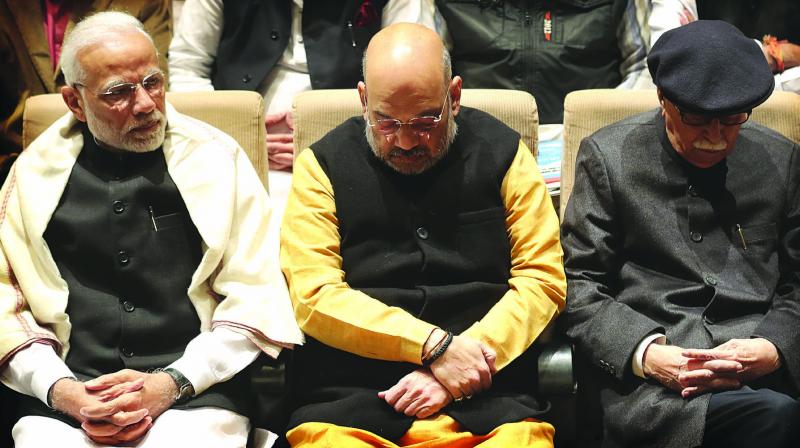 Poll analysts believe if all these states vote in 2019 as they have voted in recent polls, BJP’s tally may dip to 23 from 63, while the Congress may jump to 40 from six seats. The rest may be wrested by others.

New Delhi: The recently concluded Assembly election for five states, most specifically for three Hindi heartland ones, has been considered as semi-final to upcoming 2019 Lok Sabha elections. BJP ruled key states of Rajasthan, Madhya Pradesh and Chhattisgarh with humoungous majority, performed perfectly in 2014 Lok Sabha polls and thus its loss in these assembly polls has seriously dented party’s parliamentary calculus.

There are total 83 Lok Sabha seats in Madhya Pradesh, Rajasthan, Chhattisgarh, Telangana and Mizoram. Barring Mizoram, BJP had performed well in states and had bagged 63 seats. Congress had scored merely six, while others had grabbed 14 seats.

Poll analysts believe if all these states vote in 2019 as they have voted in recent polls, BJP’s tally may dip to 23 from 63, while Congress may jump to 40 from six. Rest may be wrested by others.

Close scanning of previous poll records in the country shows that all these states have historically voted in the same way in both Assembly and Lok Sabha polls 90-95 percent.

Madhya Pradesh:
Out of 230 Assembly seats in the state, Congress has secured 114, hile BJP managed to maintain its hold on 109 seats. Others have claimed seven. There are total 29 Lok Sabha seats in the state. In 2014, BJP got 27 while two seats fell in Congress’ bag. If the current voting pattern carries into 2019 Lok Sabha polls, as per calculation,Congress may grab 16 and BJP may be restricted to 13 seats.

Rajasthan:
In Rajasthan, out of 200, 199 Assembly seats went to polls. Congress won 99, BJP got 73 and BSP was victorious on 6 seats. Others bagged 18 seats. There are 25 Lok Sabha seats in the state. In 2014, BJP had scored a perfect 25. Commensurate to Assembly poll results, Congress may get 12 seats while BJP may plummet to 9 seats. Others will claim rest.

Chhattisgarh:
Out of 90 seats of Chhattisgarh, Congress has won 68, BJP’s tally has dipped to 15, while others have claimed seven seats. This state has total 11 Lok Sabha seats. In 2014, BJP had won 10 constituencies. If results of the Assembly polls are replicated in 2019 polls, Congress is likely to get 9 seats, while BJP and others will get one each.

Telangana:
There are total 119 Assembly seats in the state. Telnagana Rashtra Samiti has bagged mammoth 88 seats. Congress alliance has been limited to 21 seats. All India Ittehad ul Muslimeen (AIMIM) won 7 seats out 8 it contested. While others won on 3 seats. Small state has 17 Lok Sabha seats. In 2014, Congress and BJP had bagged two seats each. TRS had won on 11 seats. If state polls in 2019 the way it voted in Assembly election, BJP will not be able to open its account. Congress may get 3 while TRS will score with maximum 13 seats.

Mizoram:
The tiny state has 40 Assembly seats where Mizoram National Front has got 29 seats, while Congress and BJP have managed 5 and one seat respectively. With this election, BJP ushered in the state Assembly. But, given the voting trend, both BJP and Congress will score zero in 2019 and the only Lok Sabha seat may go to MNF.

Professor Ujjwal K. Choudhry, dean of Media Studies Faculty, Pearl Academy, New Delhi, sees decline of BJP as an obvious outcome of recent Assembly polls and predicts decrease in party’s tally in 2019 Lok Sabha polls. “Not only in all these mentioned states, BJP will go down in Gujarat, which is a sort of its home state because of PM Modi hailing from it. Congress on the other hand will form a grand alliance of Opposition parties and will meanwhile introduce relief measures in states like MP and Rajasthan. (Congress governments in Rajasthan, Madhya Pradesh and Chhattisgarh waived farmers’ loans). It will take ensure youth-centric measures and will tailor state budgets to better address problems of people. These measure once successful will tomtom across the nation and will certainly raise chances of Congress and will sink BJP,” said Prof Choudhry.

On another note, Prof Choudhry said that if BJP bounces back, it would manage to get up to 50-60 seats in all these states in the best possible scenario for the saffron party.

Before these Assembly polls, political commentators had started peddling opinion that Congress can’t stand in direct bilateral fight against BJP in any state and if given so, it will be trounced as had happened in many recent polls. This myth has been broken.

“Plus, these polls have proved that the Modi wave has finally punctured. And slogans like ‘chowkidar hi chor hai’ have found takers among Indian voters. Such slogans, alongwith further more coined, will find more traction in run up to 2019 polls,” says Nissar Siddiqui, a Delhi-based political analyst.

Siddiqui has travelled far and wide in Hindi heartland states to know public opinion before 2019 polls.

He says that the energy, which was hallmark of BJP’s booth strength, seems to have shifted towards Congress. “Congress worker is now full of enthusiastic energy now. After defeat, morale of BJP worker will be down. BJP is fast failing to hand over issues to its workers. On governance front, its failure reverberates in almost states. The party seems to have left with no issue except Ram Temple. But even on this issue, its NDA allies like Nitish Kumar and Ram Bilas Paswan have made their discomfiture clear. All these signs don’t bode well for saffron party,” said Siddiqui.