The residents of the area alleged that these minors had been 'trapped' inside the ashram and were trained to work as sex workers. 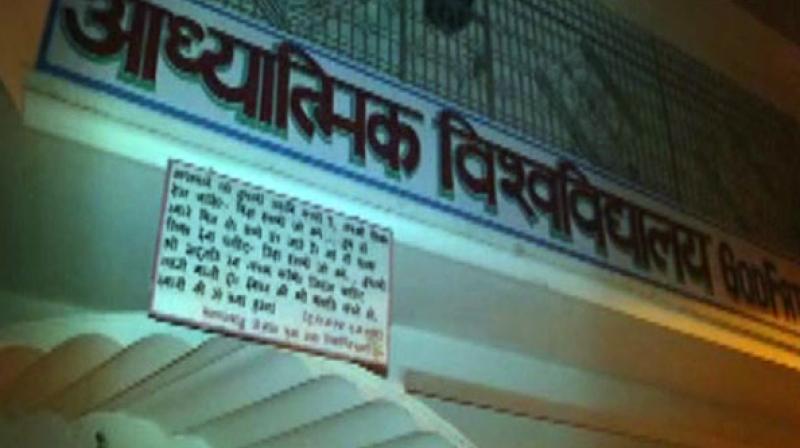 The Delhi High Court earlier had directed the Central Bureau of Investigation (CBI) to investigate the ashram in Rohini where girls and women were allegedly being illegally imprisoned. (Photo: ANI)

New Delhi: Over 40 girls were rescued by the Delhi Commission for Women (DCW) along with the Child Welfare Committee (CWC) and the Delhi Police from Rohini's Adhyatmik Vishwa Vidyalaya.

The step was taken after the Delhi High Court formed a panel consisting of lawyers and the DCW chief, to inspect the premises of the so-called institute, owned by the Baba Virender Dikshit where girls and women were allegedly kept in illegal confinement.

"A 13-year-old victim said that she was raped by the Baba. It is high time to take action against such Babas. We were also held hostage when we went there to rescue the victims. Somehow we managed to rescue the girls," DCW chief Swati Maliwal told the media.

"We also came across lots of medicines stocked up which we are sure were being given to these girls as they seemed to be in a trance when we rescued them", she added.

Maliwal also tweeted on Thursday, "Finally, after 3 days, in a mammoth operation, 41 minor girls were rescued from Baba Virender Dikshit Ashram with the help of CWC & Delhi Police. These girls will now be counselled, their parents will be contacted and their ages will be verified. This place needs to be shut & the baba should be arrested!."

The rescued girls, who were sent to the shelter homes, will now be counselled.

The residents of the area alleged that these minors had been "trapped" inside the ashram and were trained to work as sex workers.

"This place has been given the name of a University. Girls from this place were taken to some place in buses and there were trained as a sex labor. This place was a complete fraud and the girls who used to come here were not even allowed to meet their parents," one of the residents told ANI.

The Delhi High Court earlier had directed the Central Bureau of Investigation (CBI) to investigate the ashram in Rohini where girls and women were allegedly being illegally imprisoned.

The inmates of the ashram were brought from various parts of the country.

Meanwhile, the police are probing the matter.