India   All India  22 Dec 2017  Cong walks out from of LS, seeks PM apology on remark against Manmohan
India, All India

Cong walks out from of LS, seeks PM apology on remark against Manmohan

The Congress also sought an apology from BJP for alleging that a 2G spectrum scam had taken place during the UPA rule. 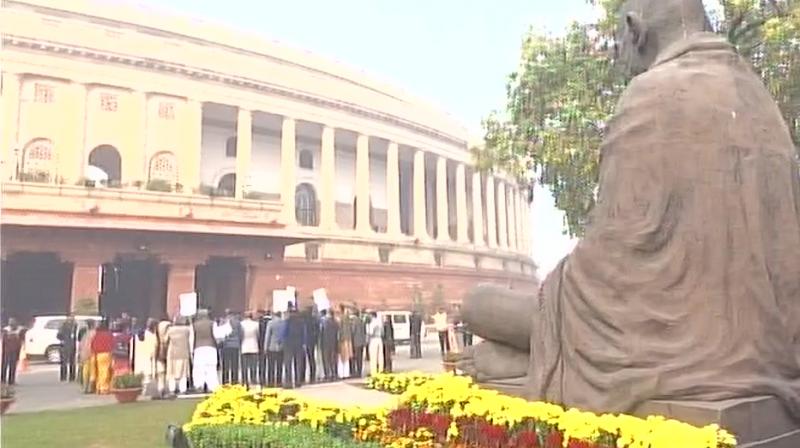 The protesting Congress members continued to raise slogans for an hour even as Speaker Sumitra Mahajan continued with the Question Hour proceedings. (Photo: ANI/Twitter)

New Delhi: The protests by Congress in the Lok Sabha over the remarks made by Prime Minister Narendra Modi against former premier Manmohan Singh entered the fifth day on Wednesday, as it also asked the BJP to apologise for the charges it had made regarding the 2G spectrum scam.

Soon after the House assembled and took up the Question Hour, Congress members trooped into the Well raising slogans demanding an apology from Modi for his charges during Gujarat poll campaign that Manmohan Singh and others had colluded with Pakistan to rig the election results.

The protesting Congress members continued to raise slogans for an hour even as Speaker Sumitra Mahajan continued with the Question Hour proceedings.

A visibly upset Congress leader in the House Mallikarjun Kharge raised concerns about not being allowed to raise the issue despite making the demand for the past five days.

Few minutes after the Zero Hour began at noon, the protesting Congress members walked out.

Besides seeking an apology from Modi, the Congress members also sought an apology from the BJP for alleging that a scam had taken place in connection with the 2G spectrum allocation during the UPA rule.

Their demand came a day after a special court acquitted all the accused in the 2G scam case.

On the fifth day of their protest, the number of Congress members in the Well was less compared to other days.

The overall attendance in the House was on the lower side, both in the Treasury and the Opposition sides.

The Prime Minister, UPA chairperson Sonia Gandhi and Congress president Rahul Gandhi were also not present in the House.

Sonia Gandhi is usually present during Question Hour, which has recently witnessed her party members protesting in the Well.

Parliament would now meet again on Wednesday after a long weekend due to Christmas.