After a special CBI court acquitted all accused in the 2G spectrum scam, Rahul said 2G was vindication of Cong's stand. 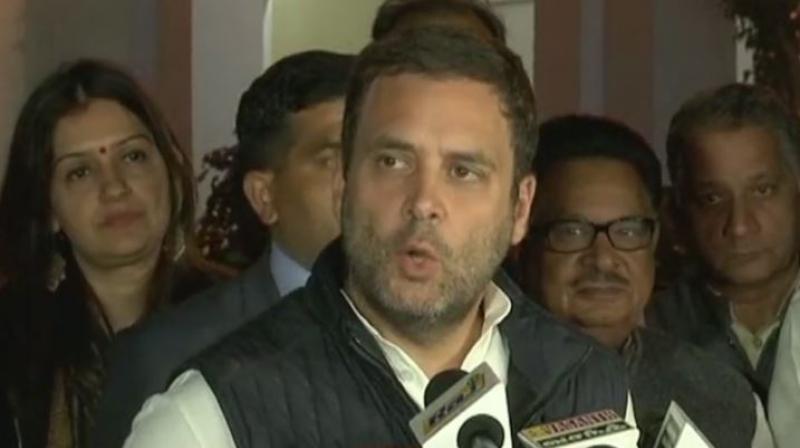 Rahul asked why the PM was 'silent' on Rafale deal and financial irregularities of a firm linked to BJP chief Amit Shah's son Jay. (Photo: ANI)

New Delhi: A day after a special CBI court acquitted all accused in the 2G spectrum scam, one of the biggest corruption scandals under the Manmohan Singh led UPA government, the newly elected Congress president Rahul Gandhi hit out at Prime Minister Narendra Modi saying BJP's whole architecture and foundation were based on "lies".

"You all know the truth now about 2G, the truth is in front of you," Rahul told media after chairing his maiden Congress Working Committee (CWC) meet after becoming the party president.

"I think 2G has been vindication (of Congress' stand)," Rahul added.

On Thursday, a special CBI court said investigators had failed to prove allegations that 2G or second generation spectrum was allocated out-of-turn at cheaper rates in exchange for bribes when Congress was in power and DMK's A Raja was the telecom minister.

Comptroller and Auditor General (CAG)’s charge that there was a loss of Rs 1.76 lakh crore to the exchequer in the allocation of the 2G spectrum during the erstwhile UPA regime was rubbished by the court, which commented that "a huge scam was seen by everyone where there was none".

The Congress president also asked why the Prime Minister was "silent" on the allegations made by the Opposition over Rafale deal and financial irregularities of a firm linked to BJP chief Amit Shah's son Jay.

The former president of Congress and Rahul’s mother Sonia Gandhi and former prime minister Manmohan Singh were seated next to Rahul who addressed his debut meeting of the Congress’ decision making body as the party chief.