2G: The scam that wasn’t; court acquits Raja, Kanimozhi, 18 others

Court says facts were ‘artfully’ arranged to create a scam ‘when there was none’; acquits Raja, Kanimozhi. 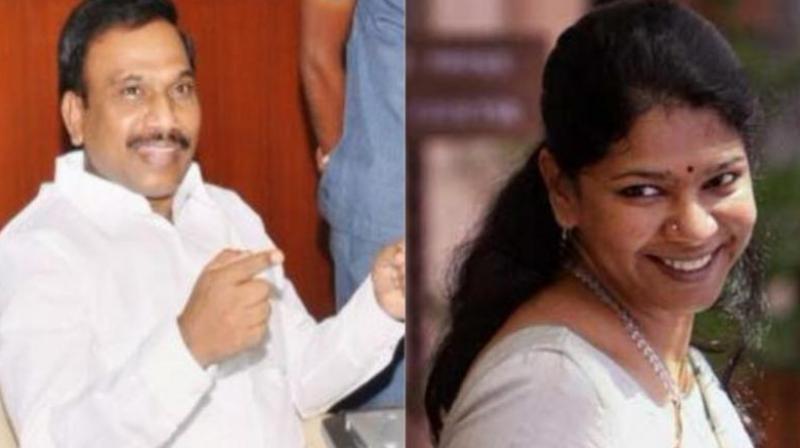 New Delhi: In a big embarrassment for the CAG, the CBI and the ED, a special court here on Thursday acquitted former telecom minister A. Raja and DMK’s Rajya Sabha member Kanimozhi and 18 others in three cases linked to the alleged multi-crore 2G telecom scam, saying there was no scam as the prosecution had failed miserably in proving charges made in its well “choreographed” chargesheet containing “incorrect facts”.

The case had virtually brought down the UPA government when former CAG Vinod Rai alleged wrongdoing in allocation of 2G spectrum and said that the allocation of licences caused a loss of Rs 1.76 lakh crore to the government.

Exposing the probe agencies’ inefficiency, CBI special judge O.P. Saini said that some people had “artfully” arranged few selected facts and created a scam “when there was none”. The judge also junked the ED’s money laundering case against Mr Raja and Kanimozhi, citing absence of “proceeds of crime” as there was no scam. Stung by the court’s criticism, both the CBI and ED said that they will challenge the verdict in the high court.

The politically sensitive CBI case, which also led to the Supreme Court cancelling 122 licences of eight telecom companies in 2012, fell flat as Judge Saini, in his 1,552 — page verdict, delivered at Patiala House district courts, said, “I have absolutely no hesitation in holding that the prosecution has miserably failed to prove any charge against any of the accused, made in its well choreographed chargesheet.”

Giving a clean chit to former Prime Minister Manmohan Singh, the court said, “On account of the various actions and inactions of the officials, nobody believed the version of department of telecommunications and a huge scam was seen by everyone where there was none. It is clear that complete facts were not placed before the then Prime Minister (Manmohan Singh) by his own office for which A. Raja cannot be faulted.”

“There is no material on record to show that Raja was mother lode of conspiracy in the instant case. There is also no evidence of his no­holds­barred immersion in any wrongdoing, conspiracy or corruption,” the court said.

The acquittal drew curtains on a six-year-long trial, which cast a shadow on politicians, bureaucrats and top India Inc. officials, that saw Mr Raja, among other accused, languish in jail, before stepping out on bail. 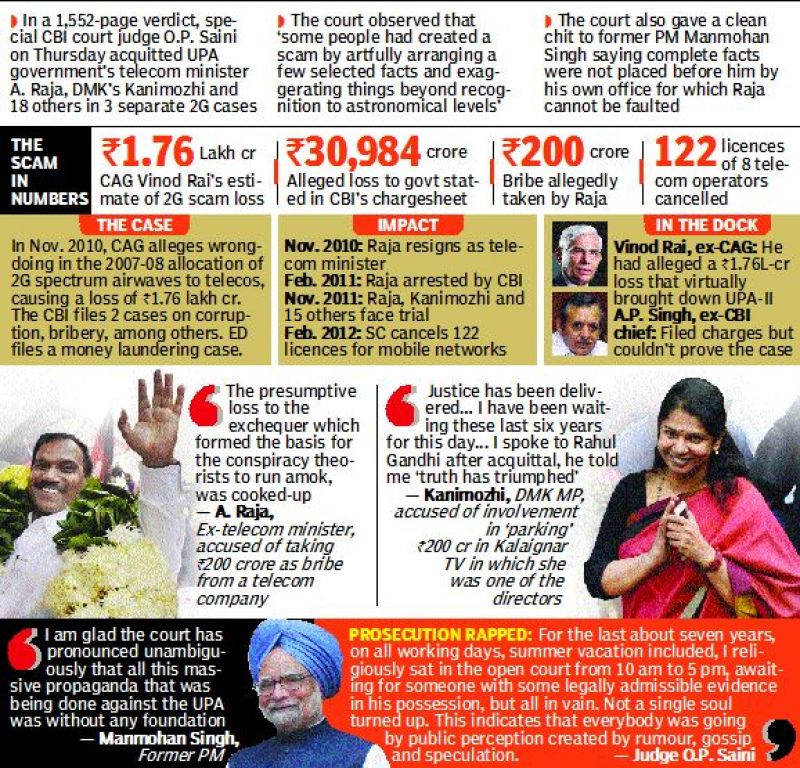 Pulling up the prosecution for presenting a weak case, Judge Saini said,  “The witnesses from DoT were either highly guarded, hesitant in their deposition and also went against official record rendering themselves unreliable” and added that witnesses from the companies of the accused also did not support the prosecution’s version.

Exposing the prosecution, the judge said that special public prosecutor was not ready to sign the written submissions filed by him.

“In the beginning, the prosecution started with the case with great enthusiasm and ardour. However, as the case progressed, it became highly cautious and guarded in its attitude making it difficult to find out as to what the prosecution wanted to prove,” he said.

“However, by the end, the quality of prosecution totally deteriorated and it became directionless and diffident”.

The verdict hinted at an alleged conspiracy to weaken the case against the accused. “… For the last about seven years, on all working days, summer vacation included, I religiously sat in the open court from 10 AM to 5 PM, awaiting for someone with some legally admissible evidence in his possession, but all in vain. Not a single soul turned up. This indicates that everybody was going by public perception created by rumour, gossip and speculation. However, public perception has no place in judicial proceedings,” said the judge.

In the ED’s case alleging money laundering of `200 crore, the court acquitted 10 persons and nine companies and directed that property worth `223.55 crore of Dynamix Balwa (DB) group of companies and its associates, attached earlier by the ED during the probe,be released to the persons from whom the same were attached, “after the time for filing of appeal is over”.

The CBI had alleged in its chargesheet, filed in 2011, that there was a loss of `30,984 crore to the exchequer in allocation of licences for 2G spectrum, which were later scrapped by the Supreme Court on February 2, 2012.

After the acquittal, the CBI said, “It appears that the evidence adduced to substantiate the charges by the prosecution has not been appreciated in its proper perspective by the trial court… In due course the CBI will be filing an appeal in the Delhi high court.” The Enforcement Directorate also said that it would file an appeal challenging the verdict.

The judge said the CBI could not prove that Mr. Raja, along with officials from companies that got the 2G spectrum licenses for telecom services, had conspired to receive kickbacks from the sale of phone permits, causing a notional loss of Rs. 1.76 lakh crore to the government.

The “2G Scam” had rocked the UPA government over alleged irregularities in the allocation of second generation (2G) spectrum in 2008, when Unified Access Services (UAS) licences were issued on a first come, first served basis at a price that was decided in 2001.

Absolving the accused of all charges, Judge Saini said, “No evidence on the record was produced before the court indicating any criminality in the acts allegedly committed by the accused persons relating to the fixation of cut-off date, manipulation of first come first served policy.”

The court said, “Non-understanding of issues led to a suspicion of grave wrongdoing where there was none. DoT could neither effectively communicate the issues to others nor others could understand the same. Issues got snowballed when media reports started appearing. The lack of clarity in the policies as well as guidelines added to the confusion. The guidelines have been framed in such a technical language that the meaning of many terms are not clear even to DoT officers.”

The verdict by Judge Saini also raises questions about the Supreme Court’s verdict delivered in February 2012, when it cancelled 122 2G licences granted by the UPA. The apex court had held that licences for 2G spectrum were granted in arbitrary and unconstitutional manner, resulting in loss of revenue.