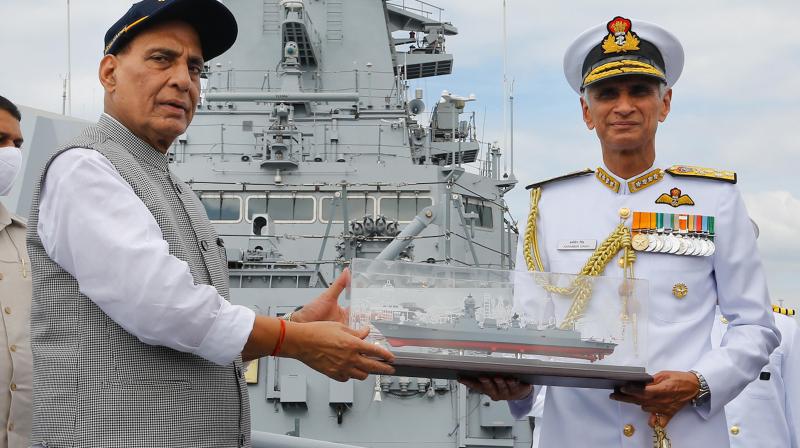 Defence Minister Rajnath Singh being presented a memento by Admiral Karambir Singh (R) on board INS Visakhapatnam, the stealth guided-missile destroyer ships of Project 15B, during it's commissioning ceremony at the naval base in Mumbai, Sunday, Nov. 21, 2021. (PTI)

New Delhi: INS Visakhapatnam, a P15B stealth guided missile destroyer, was on Sunday commissioned into the Indian Navy at the Naval Dockyard, Mumbai. This marks the formal induction of the first of the four ‘Visakhapatnam’ class destroyers, indigenously designed by the Indian Navy’s in-house Directorate of Naval Design and constructed by Mazagon Dock Shipbuilders, Mumbai.

Defence minister Rajnath Singh, who was present on the occasion, termed INS Visakhapatnam as a symbol of the country's growing maritime prowess and a major milestone of "Make in India, Make for the World".

Mr Singh exuded confidence that the state-of-the-art ship, equipped with the latest systems and weapons, will strengthen the nation's maritime security. “The carrier will increase our reach from the Indian Ocean to the Pacific and Atlantic Ocean,” he said.

The defence minister said that global security reasons, border disputes and maritime dominance have forced countries to move towards strengthening their military power.

He emphasised on the need to keep the Indo-Pacific region open, safe and secure, terming it as the primary objective of the Indian Navy. Mr SIngh underscored the importance of a rule-based freedom of navigation and security of sea lanes in the present era of globalisation to ensure stability and economic progress and reiterated that India, as a responsible maritime stakeholder, is a supporter of consensus-based principles and a peaceful, open, rule-based and stable maritime order.

“In the 'United Nations Convention on the Law of the Sea' (UNCLOS) of 1982, territorial waters of nations, exclusive economic zones and the principle of 'Good order at sea' have been propounded. Some irresponsible nations, for the sake of their narrow partisan interests, keep on giving new and inappropriate interpretations to these international laws from hegemonic tendencies. The arbitrary interpretations create obstacles in the path of a rule-based maritime order. We envision a rule-based Indo-Pacific, with freedom of navigation, free trade and universal values, in which the interests of all the participating countries are protected,” he said.

INS Visakhapatnam is propelled by four powerful gas turbines, in a Combined Gas and Gas (COGAG) configuration, capable of achieving speeds in excess of 30 knots. The ship has enhanced stealth features resulting in a reduced Radar Cross Section (RCS) achieved through efficient shaping of hull, full beam superstructure design, plated masts and use of radar transparent materials on exposed decks.

Named after the historic city of Andhra Pradesh on the east coast, Visakhapatnam, the ‘City of Destiny’, the ship is packed with sophisticated state-of-the-art weapons and sensors such as surface-to-surface missile and surface-to-air missiles. It is fitted with a modern surveillance radar which provides target data to the gunnery weapon systems of the ship. The anti-submarine warfare capabilities are provided by the indigenously developed rocket launchers, torpedo launchers and ASW helicopters. The ship is equipped to fight under Nuclear, Biological and Chemical (NBC) warfare conditions.

The ship has a total complement of about 315 personnel and will be under the command of Captain Birendra Singh Bains, a navigation and direction specialist.