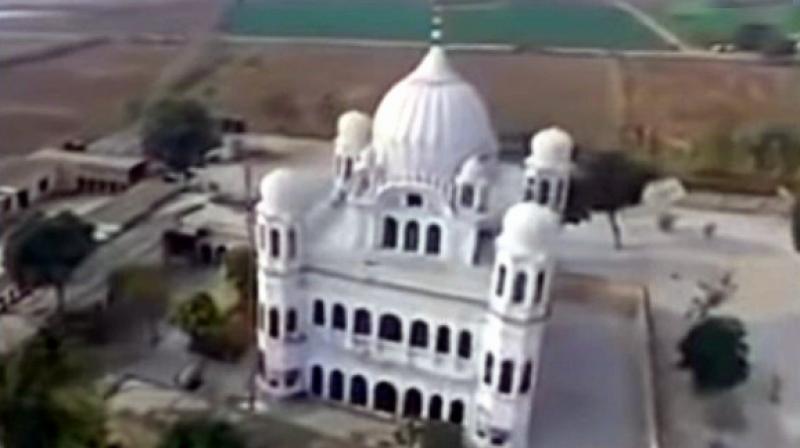 Kartarpur Sahib in Pakistan is located across the river Ravi, about four kilometres from the Dera Baba Nanak shrine in Punjab's Gurdaspur district. (Photo: Youtube | Screengrab)

New Delhi/Islamabad: Pakistan has conveyed to India its decision to open the Kartarpur Corridor for the Sikh pilgrims on the occasion of Guru Nanak's 550th birth anniversary, Foreign Minister Shah Mahmood Qureshi said on Thursday, a development which could help ease tensions between the two neighbours.

Kartarpur Sahib in Pakistan is located across the river Ravi, about four kilometres from the Dera Baba Nanak shrine in Punjab's Gurdaspur district. It was established by the Sikh Guru in 1522. The first Gurdwara, Gurdwara Kartarpur Sahib, was built here, where Guru Nanak Dev is said to have died.

India also said it will build and develop a corridor from Dera Baba Nanak in Gurdaspur district to the International Border to facilitate Sikh pilgrims visiting Gurdwara Darbar Sahib Kartarpur on the banks of the Ravi river in Pakistan.

Pakistan's Information Minister Fawad Chaudhry welcomed the Indian announcement to commence the construction of the Kartarpur corridor, calling it a "victory of peace". "It is a step towards the right direction and we hope such steps will encourage voice of reasons and tranquillity on both sides of the border," he tweeted.

In New Delhi, External Affairs Ministry Spokesperson Raveesh Kumar said India has approached the Pakistani government to recognise the sentiments of the Sikh community and build the corridor, in keeping with the resolution adopted by the Cabinet on Thursday to commemorate the 550th birth anniversary of Guru Nanak Dev next year.

In response, Pakistan's Foreign Office spokesman Mohammad Faisal said Prime Minister Khan has proposed in writing to hold talks on all issues, including Kartarpur, but India refused to come forward. He said Pakistan's efforts were continuing and it issued 3,838 visas to Indian Sikhs to visit Pakistan to attend religious ceremonies.

"We on our part will continue our efforts but we cannot do much unless there is response from the other side," Faisal said.

Thousands of Sikh devotees from India visit Pakistan every year to celebrate the birth anniversary of Guru Nanak. The issue of Kartarpur Sahib came into focus after Punjab Minister Navjot Singh Sidhu visited Pakistan in August to attend the oath-taking ceremony of his cricketer-turned-politician friend Imran Khan as prime minister of that country.

After his return, Sidhu said that Pakistan Army chief Qamar Javed Bajwa had told him that Pakistan may open a corridor to Kartarpur Sahib.