India   All India  22 Nov 2018  Farmers march to Azad Maidan in Mumbai for land ownership, other demands
India, All India

Farmers march to Azad Maidan in Mumbai for land ownership, other demands

Farmers from across Maharashtra, beginning their march on Tuesday, reached Byculla Bridge in the city on Thursday morning. 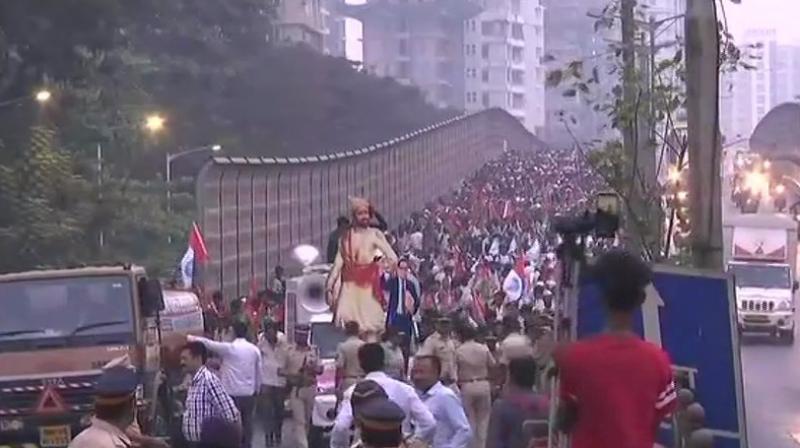 Mumbai: Thousands of farmers under the aegis of Lok Sangharsh Morcha on Thursday marched towards Azad Maidan here to press for their demands, which include farm land ownership and implementation of Forest Rights Act.

Farmers from across Maharashtra, beginning their march on Tuesday, reached Byculla Bridge in the city on Thursday morning. They are also scheduled to meet Chief Minister Devendra Fadnavis later in the evening. There are also likely to take up the issue of loan waiver.

Speaking to ANI, general secretary of the Lok Sangharsh Morcha Pratibha Shinde said, "We will definitely meet the Chief Minister and put forward our demands. Only after the meeting, we will be able to decide whether the government and we are on the same page or not. In the last six months, the government has not even done even two per cent of the works they promised to us."

On Wednesday evening, Maharashtra's Water Resources and Irrigation Minister Girish Mahajan met the protesters and asked them to hold a meeting with Chief Minister Fadnavis to which the farmers agreed. Last night, farmers had stayed at Shivaji Maidan in Chunabhatti.

This is the third mass protest of farmers in Maharashtra within a year. Earlier in March this year, around 25,000 farmers under the banner of All India Kisan Sabha carried out a protest march, demanding a complete farm loan waiver. In July, dairy farmers too protested, seeking a hike in milk prices.