Report further classified the accident as 'error in working by public near railway line'. 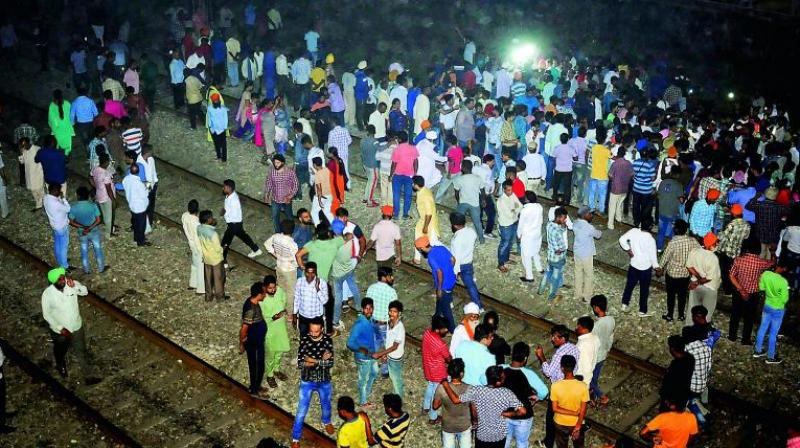 The incident took place at a time when there was smoke in the air due to fire crackers and burning of Ravana's effigy, the report said. (Photo: File)

New Delhi: "Negligence" of people led to last month's Amritsar tragedy in which 60 people were mowed down by a train as they watched Dussehra celebrations while standing on a railway track, the Chief Commissioner of Railway Safety said in his provisional report on Thursday, virtually giving the railways a clean chit in the case.

"Having carefully considered the factual material and circumstantial evidences so far available at my disposal, I have provisionally come to the conclusion that the unfortunate incident of running over of 60 persons near Jaura-Fatak near Amritsar railway station of Ferozpur division of Northern Railways on October 19, 2018 at 6:55 pm occurred due to the negligence of persons reportedly standing on and near railway track witnessing Dussehra Mela at Dhobi Ghat," CCCRS S K Pathak said in the report, a copy of which is with PTI.

He has further classified the accident as "error in working by public near railway line" and made a slew of recommendations to avoid such accidents in the future.

The Commission of Railway Safety, works under the administrative control of the Ministry of Civil Aviation and deals with matters pertaining to safety of rail travel and train operation and is tasked with certain statutory functions to investigate railway accidents.

During its enquiry, Pathak noticed that the spot of the incident was not visible till the train was within 200 metres of the revellers due to the S-curve.

The incident took place at a time when there was smoke in the air due to fire crackers and burning of Ravana's effigy, the report said.

It also stated that while the permissible speed on this section was 100 kmph, the train was running at a speed of 82 kmph when the loco pilot saw the crowd and applied brakes.

In the trial, it was seen that the braking distance of the train was 389 metres. According to the report, 50 policemen were present at the spot and despite them trying to move the crowd away from the tracks, the people did not oblige.

The CCRS in his report has also recommended that prior intimation to railway administration should be given by the district administration/organisers to hold big events like rallies so that railway can take proper precautions in consultation with stakeholders.

It has also said that both the Government Railway Police (GRP) as well as the Railway Protection Force (RPF) should hold regular meetings with the state police and update all such events where large gatherings are expected in a calendar so that steps can be taken in advance to avoid such incidents.

State administration in coordination with railway administration should also impart training and sensitise residents especially those living in the vicinity of tracks in urban areas of the dangers of straying on the tracks and the penalties that could be imposed, the report said.

It also asked the authorities to conduct awareness programmes and workshops in schools, interaction with loco drivers who have witnessed accidents to leave a lasting impression on the minds of youngsters on the dangers of straying on the tracks.