Tej Pratap said that the Deputy CM had invited him to attend the marriage ceremony of his son which is scheduled for December 3. 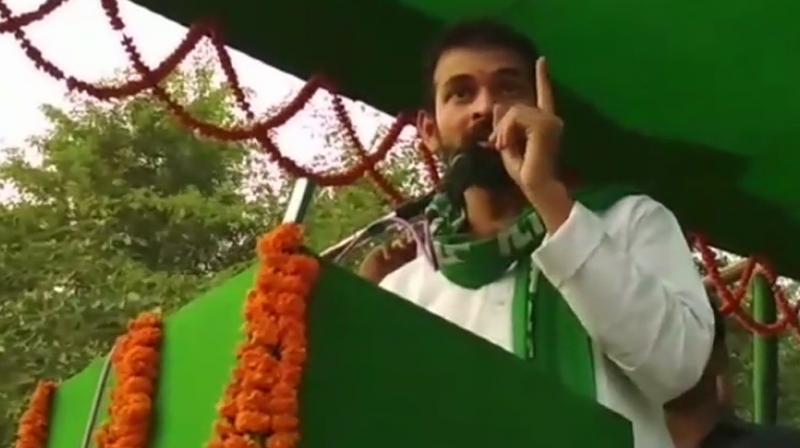 He said that the Deputy Chief Minister had invited him to attend the marriage ceremony of his son which is scheduled for December 3.

“He had telephoned me and invited me to attend the wedding of his son Utkarsh. He wants to insult me during the wedding event but he doesn’t know that I am a different kind of person. I along with my supporters will disrupt the wedding session and beat him up and also hold a public meeting inside the venue to expose him”, Tej Pratap Yadav said while addressing the public meeting.

Reacting sharply to the controversial statement Bihar Deputy Chief Minister Sushil Kumar Modi said, “This kind of language was not expected from Tej Pratap Yadav who is the son of Lalu Yadav. I urge Lalu Yadav to stop his sons from making statements like these”.

According to Modi, family members of Lalu Yadav have been targeting him ever since CBI raided their house and registered FIR in connection with the railway hotels tender scam case.

Nitish Kumar had resigned as Chief Minister of the Grand Secular Alliance government in July after Lalu Yadav’s younger son Tejaswi Yadav repeatedly refused to give explanations about corruption charges he has been facing.

Within 24 hours of his resignation, Kumar was sworn in as Chief Minister of the NDA government along with BJP leader Sushil Kumar Modi who took oath as Deputy Chief Minister.

It was Sushil Kumar who had earlier raised a string of corruption charges against Lalu Yadav’s family. He had accused the family of laundering money through various shell companies to purchase properties in Patna and New Delhi’s high profile location at a throwaway price.

“I want Lalu Yadav and his family to attend the marriage ceremony of my son Utkarsh. Tej Pratap Yadav is angry with me because he thinks it was due to me he lost his chair”, Sushil Kumar Modi said.