Has ISIS succeeded in making inroads in Kashmir? Centre says no

Union Home Minister Rajnath Singh has also dismissed reports about the presence of ISIS in the state. 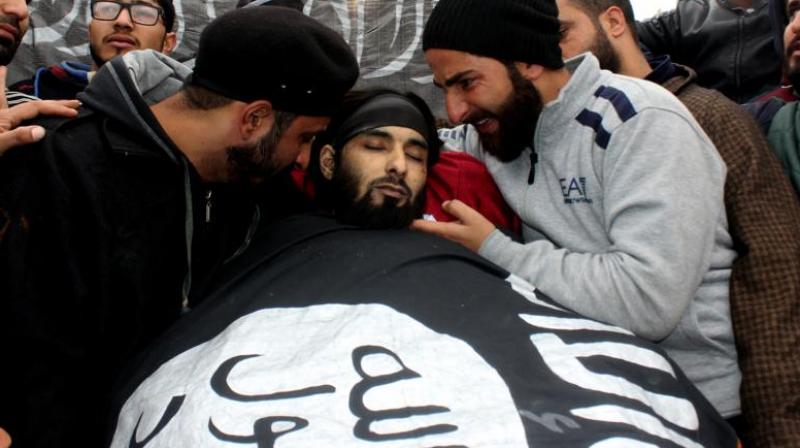 Mughees Ahmed Mir’s body was wrapped in an ISIS flag at his funeral, which was attended by thousands of mourners. (Photo: HU Naqash)

Srinagar: Has the Islamic State group, also known as ISIS, succeeded in making inroads in Kashmir? The authorities in Srinagar said a categorical ‘no’ when sought a reply. “I don’t think ISIS has any footprints here,” said Jammu and Kashmir’s Director General of Police, Shesh Paul Vaid.

Union Home Minister Rajnath Singh has also dismissed reports about the presence of ISIS in the state, saying the Indian Muslims would never allow such outfits to have a base in the country.

Earlier, the central government sought to downplay ISIS' claim over a shootout in which a police officer and a militant were killed in Srinagar on November 18. ISIS, in its official news agency 'Amaq', had claimed the responsibility for the attack.

“There is no authoritative information about the presence of ISIS in Jammu and Kashmir”, a senior home ministry official had said.

On November 18, three men, travelling in car, opened fire at a police party in Srinagar’s Gulab Bagh area. The cops returned fire as the car sped away through a makeshift check-point laid by police following specific information about the movement of militants in the area.

The police was not sure if the retaliatory fire caused any casualties among the car-borne militants. However, a couple of hours later, the bullet-riddled corpse of a militant, Mughees Ahmed Mir, arrived at his residence in Srinagar’s Parimpora and soon it was learnt that he was among the trio travelling in the car.

Initial reports had said that he was an associate of Zakir Musa, a militant commander who revolted against Kashmir’s frontline indigenous outfit Hizbul-Mujahideen earlier this year. He was subsequently appointed by al-Qaida as the head of its newly created cell in Kashmir named ‘Ansar Ghuzwat-Ul-Hind’.

But Tehrik-ul-Mujahedin, another Kashmiri outfit formed during the heyday of militancy, was quick to claim that Mughees Ahmed Mir alias Omar bin Khatab was actually its district commander for Pulwama and has been replaced by Adil Ahmed after his “martyrdom”.

Next day, Mir’s body was wrapped in an ISIS flag at his funeral, which was attended by thousands of mourners, the photographs of which went viral on social media. 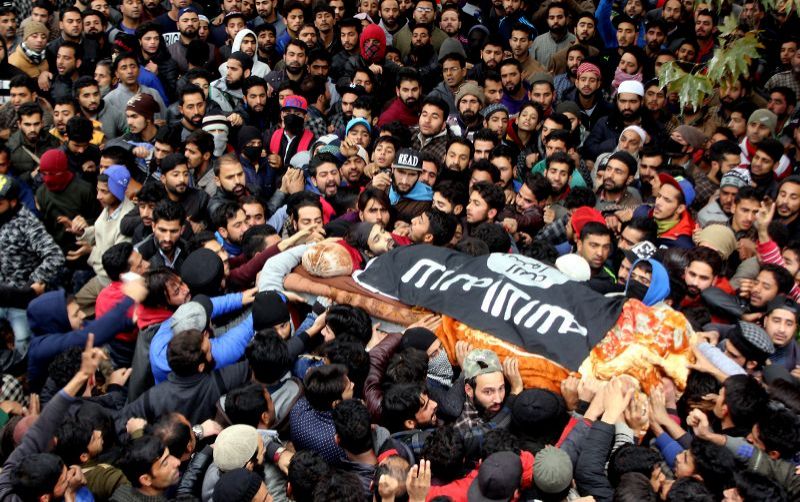 Mughees Ahmed Mir’s body was wrapped in an ISIS flag at his funeral, which was attended by thousands of mourners. (Photo: HU Naqash)

Apparently, this prompted ISIS to claim responsibility for the Gulab Bagh attack. Tehrik-ul-Mujahedin spokesperson Dr. Abdul Haq termed it ridiculous. He doubted the intention behind wrapping ISIS flag on the body of Mir and pointed his finger at “our enemies who want to give our just struggle for freedom a bad name”.

In July this year, ISIS flag was draped over the casket of a Hizbul-Mujahideen militant Sajjad Ahmed Gilkar in Srinagar’s Malaratta-Nowhatta area, raising few eyebrows in the separatist camp.

The Islamic State of Iraq and Syria (ISIS) gained global prominence in early 2014 when it drove Iraqi government forces out of key cities in its Western Iraq offensive. It has since been designated a terrorist organisation by the United Nations and by many member countries individually.

The flags of the ISIS and al-Qaeda had first appeared in Kashmir during protests and stone-pelting incidents in Srinagar, precisely outside the city’s historic Grand Mosque in 2014. Masked youth held these flags before the glare of cameras and were quickly surrounded by locals, mainly youth, apparently to ensure no harm comes to them.

During one such display, the security personnel swung into action and chased them into nearby dark alleys but no serious attempt was made to capture the masked youth carrying ISIS flag. The then chief minister, Omar Abdullah, had shrugged these incidents off saying it was being done by some “stupid” youth and that ISIS or al-Qaeda has no presence in Jammu and Kashmir.

An inquiry launched by local police had revealed that a local “small-time” cleric was involved in encouraging ISIS flag-waving at protests, particularly outside the Grand Mosque.

A reporter with a news channel was also under scanner for his role in the past. “We’ve reports that he actually knows beforehand where such flags will go up,” a police officer had told this newspaper. However, the activity did not last long.

The draping of Mir’s corpse with ISIS flag and the terror group’s claim over the attack in which he was involved have revived the debate around the crucial question ‘has ISIS succeeded in making inroads into Kashmir’?

Muhammad Yusuf Shah alias Syed Salahuddin, the chief of United Jihad Council, an amalgam of militant outfits including Tehrik-ul-Mujahedin, reacting to ISIS claim said that the Kashmiri “freedom movement” is indigenous and has no “global agenda”. Salahuddin, who is also the ‘supreme commander’ of Hizbul-Mujahideen was in June declared a ‘Specially Designated Global Terrorist’ by the US State Department, the tagging which had led to shutdowns and protests in Indian Kashmir.

Later in August, the Hizb was declared as ‘foreign terrorist organisation’ under Section 219 of the (US) Immigration and Nationality Act.