Cong has agreed to give Patidar community reservation: Hardik Patel

‘Congress has agreed to give Patidars reservations under section 31, and provisions of section 46,’ Patel said. 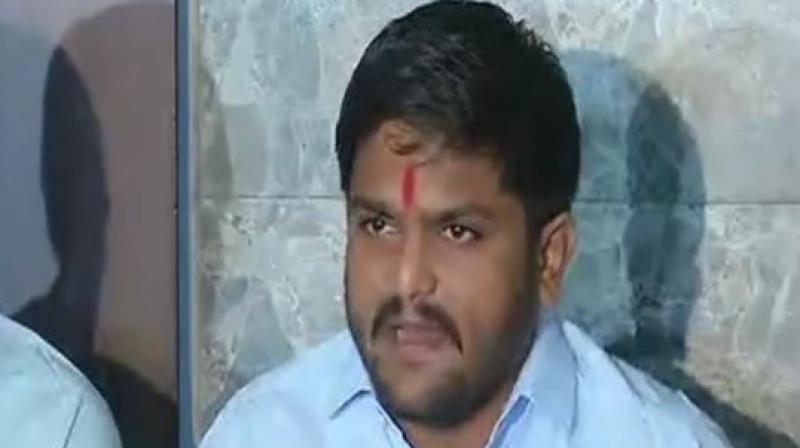 Patel said Congress will introduce a bill in the Gujarat Assembly for the reservation, if they win the forthcoming elections. (Photo: ANI | Twitter)

Ahmedabad: Days ahead of the crucial Gujarat Assembly election, Patidar Anamat Andolan Samiti (PAAS) convener Hardik Patel on Wednesday broke his silence on the tie-up with the Congress.

Hardik Patel said the Congress has assured him of reservation for his community in educational institutions and jobs at par with the Other Backward Classes (OBCs) if voted to power in Gujarat.

Patel, while addressing the media at Ahmedabad in Gujarat, said the party will introduce a bill in the Gujarat Assembly for the reservation, if they win the forthcoming elections.

"Congress has accepted our issues. Congress has agreed to give Patidars reservations under section 31, and provisions of section 46," he said.

"Draft has been prepared between us and the Congress. Formula is not restricted to Patidar community alone," he added.

Further clearing the air on the ticket distribution, the Patidar leader said, they have never asked for any ticket from the Congress party to contest the Assembly polls and there is 'no conflict within the PAAS' regarding the same.

He said his outfit has never appealed anyone to vote for the Congress Party; but since the latter is talking about the rights of the Partidars, the voting decision will be left to the people.

Hardik also said that he has not joined the Congress, but asked his supporters to vote against the BJP in the Gujarat Assembly elections.

"The Patidars have always been victimised. There is no disagreement between the Congress and Patidar leaders. BJP is trying to divide the Patidar community," he said.

Hardik had kept the Congress on the edge after postponing his media interaction twice in the last few days. He was slated to hold a press conference in Ahmedabad on Tuesday morning to clear his stand over Congress’ quota proposal for the Patidars and announce if the community would extend support to the party.

Late on Monday night, the Gujarat Congress, in an attempt to placate the furious Patidar leaders, released a second list of 13 candidates. This included nine new names and four others, who were replacing candidates from the first list released on Sunday.

Three out of these four are PAAS nominees, who Hardik and his supporters have backed vociferously.

The first list had triggered violent clashes between Congress and PAAS workers on Monday, with the latter taking a strong objection to the 77 names.

On November 20, the PAAS workers protested against Congress Party in Ahmedabad and Surat, expressing dismay over the ticket distribution for the assembly polls.