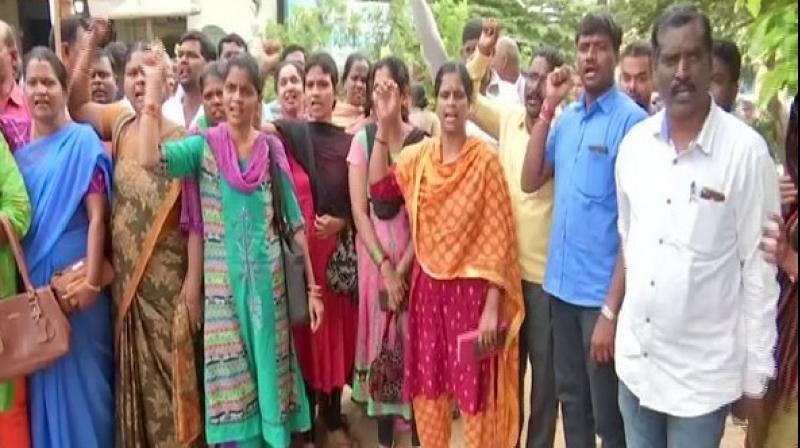 Over 49,000 workers have been on strike since October 5, protesting against the state government's order to sack over 40,000 employees of TSRTC. (Photo: ANI)

Hyderabad: Temporary staffs employed by the government to run RTC buses were looting the public, claimed TSRTC Mazdoor Union secretary VS Govind Rao on Tuesday as the RTC strike entered its 18th day in Hyderabad.

Speaking to ANI, Rao said, "Temporary Drivers appointed by the government are demanding more money from passengers without any tickets or receipts in return. They are not giving the whole amount back to the corporation also."

Meanwhile, he also questioned the K Chandrasekhar Rao-led government about the pending salaries for the month of September of the RTC employees.

"It's the 18th day of our strike to save RTC. The government has disobeyed the High Court's order to pay salaries before October 21 to RTC employees who worked in the month of September. We ask the government, Where is all the money which we earned that month? Did it go to Chief Minister's house or our Managing Director's house?" said VS Govind Rao.

"The RTC buses belong to the public. People travelling in the buses should demand tickets in exchange for the fare. If any conductor fails to give you ticket despite paying the fare, they should be taken to the nearest police station," said Shivraj who is employed as a conductor with RTC.

Over 49,000 workers have been on strike since October 5, protesting against the state government's order to sack over 40,000 employees of TSRTC. The ongoing strike by employees of TSRTC entered its 18th day on Tuesday.