India   All India  22 Oct 2019  Forces capable of giving befitting reply to those who cast evil eye on us: Rajnath
India, All India

Forces capable of giving befitting reply to those who cast evil eye on us: Rajnath

'India has never been aggressor but armed forces are capable of giving befitting reply to those who cast evil eyes on us,' Singh said. 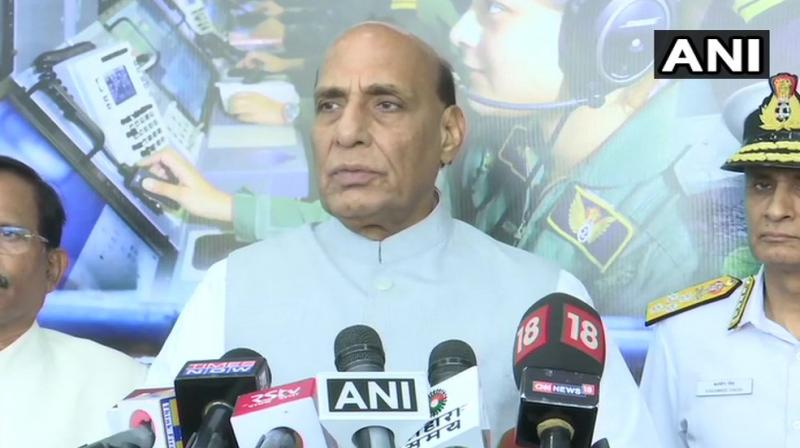 He was responding to a query on Pakistan's Railway Minister Sheikh Rashid Ahmed reported statement that his country would retaliate against India with a nuclear attack for targeting Pakistani military posts in Jammu and Kashmir's Tangadhar sector. (Photo: ANI | Twitter)

New Delhi: Defence Minister Rajnath Singh on Tuesday said India has never been the aggressor but its armed forces are capable of giving a befitting reply to those who cast an evil eye on it. The Navy has maintained vigilance to ensure that 26/11 is not repeated, Singh added while addressing the media at the Naval Commanders Conference. India, he said, has never been "offensive".

"It's character is such that it has not attacked any country nor conquered even an inch of land belonging to another nation. But the armed forces have the capability and strength to give a befitting reply to anyone who casts an evil eye on us," the minister said.

He was responding to a query on Pakistan's Railway Minister Sheikh Rashid Ahmed reported statement that his country would retaliate against India with a nuclear attack for targeting Pakistani military posts in Jammu and Kashmir's Tangadhar sector.

According to Indian Army officials, there was unprovoked firing by Pakistan in the sector on the intervening night of Saturday-Sunday. On Sunday, the Indian Army retaliated by launching heavy artillery attacks, targeting at least four terror camps and several Pakistani military positions opposite the Tangadhar sector along the Line of Control, officials said. Discussing the Indian Navy, the defence minister said he was confident that India's seas are safe in the hands of the force.

"Our Indian Navy's resolve is that 26/11 will not be repeated under any circumstances and it has ensured tight vigil," he said, referring to the November 2008 terror siege of Mumbai. The Indian Navy is marching towards indigenisation and its ships have a high percentage of indigenous equipment, Singh added. The minister also said all three services have placed emphasis on the need to reduce defence imports.

"All the three forces are also working to pick up niche technologies to meet the challenges," he said. The three-day second edition of Naval Commanders' Conference began here on Tuesday. The conference is the apex level biannual event for interaction between Naval commanders for the deliberation and formulation of important policy decisions.