The five assembly seats where byelections were held on Monday fell vacant after the leaders who represented them were elected to Lok Sabha. 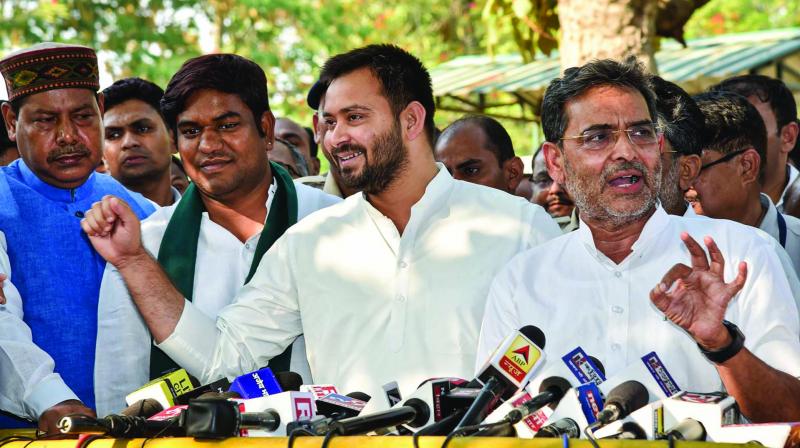 Patna: Bypolls on one parliamentary and five Assembly seats held on Monday is being seen as semi-finals ahead of assembly elections due next year.

Political analysts are of the opinion that poll results will also decide the future of Tejashwi Yadav who has been facing a leadership crisis in the RJD.

Sources claim that RJD’s decision to contest on four of the five assembly seats had created a flutter in the grand alliance last month.

Former chief minister Jitan Ram Manjhi who had joined the grand alliance in February 2018 has been giving indications of joining hands with other like-minded secular forces before the Assembly polls scheduled in 2020.

HAM spokesperson Danish Rizwan who has been closely monitoring the by-polls on Monday said that the main fight on the Nathnagar seat was between HAM and JD(U).

“Our candidate is going to win from Nathnagar seat. As far as RJD is concerned they will be pushed to the third position”, HAM spokesperson Danish Rizwan told this newspaper.

On the remaining three assembly seats — Belhar, Simri- Bakhtiyarpur and Daraundha the RJD faced tough contest from the JD(U).  From the Kishanganj assembly seat, Congress had fielded a candidate against the BJP.

The five assembly seats where byelections were held on Monday fell vacant after the leaders who represented them were elected to Lok Sabha.

“NDA is going to sweep by-election in Bihar for the one parliamentary and five assembly seats. We led a united campaign while the grand alliance was fragmented and it collapsed mid-way”, BJP spokesperson Nikhil Anand told this newspaper.

Bihar Deputy Chief Minister Sushil Kumar Modi in a tweet said that “People voted for the development. The opposition camp was so full of hatred that even on the day of polling a former chief minister claimed RJD’s defeat from two seats”.