Mithu claimed that permission was taken for holding event and announcements were asking people not to stand on tracks. 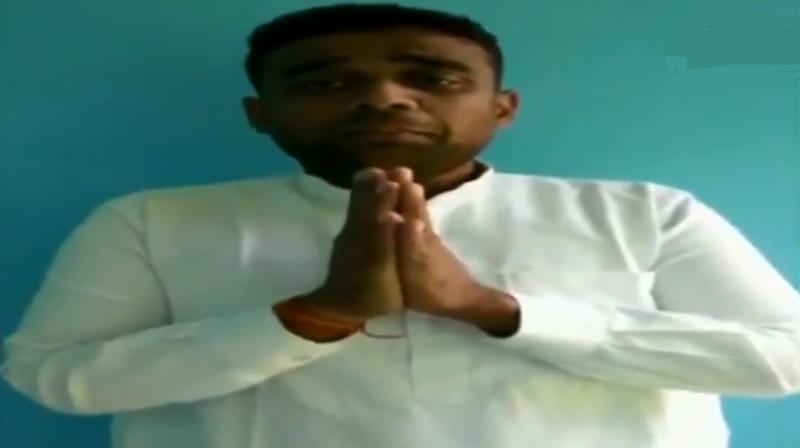 'I arranged the Dussehra event to bring everyone together. I had taken all the permissions... Had spoken to police, (municipal) corporation, fire brigade,' Saurabh Mithu said in a video in Punjabi. (Photo: ANI screengrab)

Amritsar: Saurabh Madan Mithu, son of Congress councillor Vijay Madan, who organised the Dusshera programme in Amritsar and is absconding since the tragedy, has released a video message saying that he was pained by the accident and claimed that “some people are intentionally trying to frame him” in the accident.

Mithu further claimed that permission was taken for holding the event and announcement were made a couple of times requesting people not to stand on the tracks.

“I arranged the Dussehra event to bring everyone together. I had taken all the permissions... Had spoken to police, (municipal) corporation, fire brigade," he said in a video in Punjabi.

He further claimed that they had organised the function on a ground and not on the tracks. “But some people were standing there and the train came out of nowhere. It was an act of God. What is my fault in this?” Mithu added.

He said there was a 20 feet boundary made around the Ravana effigy and the ground where the event was held also had an eight to ten feet long boundary around it.

He alleged that some people are blaming him for the train accident due to “personal rivalry”.

“With folded hands, I request you not to do this," he said.

His claims, however, contradict another video from the evening of the accident where one of the organisers was seen boasting to Congress leader Navjot Kaur Sidh, who was the chief guest, that even if 500 trains pass by, the crowd won’t move from the tracks.

Saurabh Madan Mithu along with his mother, a Congress Councillor, is missing after the incident. On Saturday afternoon, a group of people pelted stones at their residence out of anger.

CCTV footage from Mithu’s neighbourhood showed him fleeing from his house in a white SUV.

At least 62 people died during Dussehra festivities in Amritsar on Friday after a train ran over a crowd standing on the rail tracks while watching burning of Ravana effigy.