AAP leader Raghav Chadha defended the Delhi government and alleged that the BJP had 'asked petrol pump owners to go on strike in the city'. 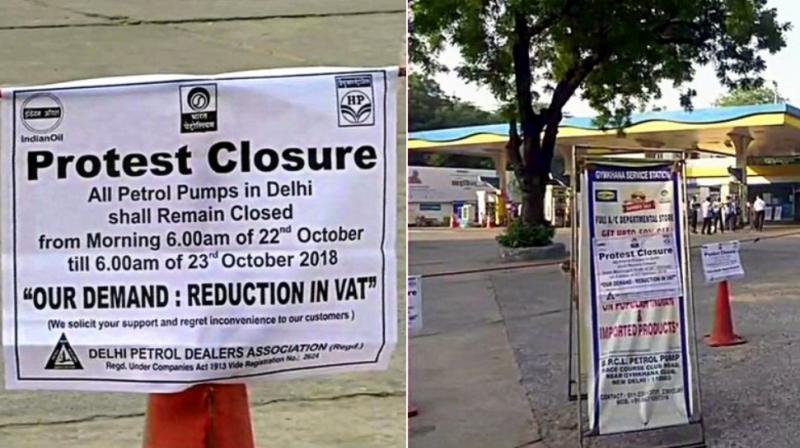 The one-day strike will see petrol pumps along with linked CNG dispensing units remain shut till 5 am on Tuesday. (Photo: Twitter | ANI)

New Delhi: Amid 400 petrol pumps strike in the national capital on Monday, the Bharatiya Janata Party (BJP) has come down heavily on the Aam Aadmi Party (AAP) led Delhi government and Chief Minister Arvind Kejriwal over his "adamant behaviour" for refusing to reduce Value Added Tax (VAT) on diesel and petrol in the city.

The one-day strike will see petrol pumps along with linked CNG dispensing units remain shut till 5 am on Tuesday.

"I condemn the adamant behaviour and decision of Delhi Chief Minister Arvind Kejriwal. We want the AAP government to work for the benefit of the people. If they can't do so then I think Arvind Kejriwal should resign from his position," he added.

Speaking to ANI, AAP leader Raghav Chadha defended the Delhi government while alleging: "The BJP has asked petrol pump owners to go on strike in the city. While few petrol pump owners agreed to the BJP's decision, others were forced to go on strike. They have been threatened that the Income Tax department will conduct raids at their properties if they don't go on strike."
The strike has been "totally engineered by the BJP," Chadha alleged.

"Since Prime Minister Narendra Modi-led government has come into power, the excise duty over petrol and diesel has been increased 12 times. Now the government is not decreasing the fuel prices, rather they are asking petrol pump owners to go on strike to create tension in Delhi. We want the central government to first decrease the prices of crude oil. They should also bring petrol and diesel under the ambit of GST. The central government has earned more than Rs 10 lakh crore only through excise duty," he said.

On October 4, the central government slashed fuel prices by Rs 2.50 per litre after curbing excise duty on the commodity by Rs 1.50 per litre. The decision was backed by several states, including Uttar Pradesh, Madhya Pradesh, Gujarat, Maharashtra, Chhattisgarh, Assam, Uttarakhand, Himachal Pradesh and Tripura. These states reduced local sales tax or the VAT.