The BJP has started looking for a suitable candidate to contest from Patna Sahib parliamentary constituency. 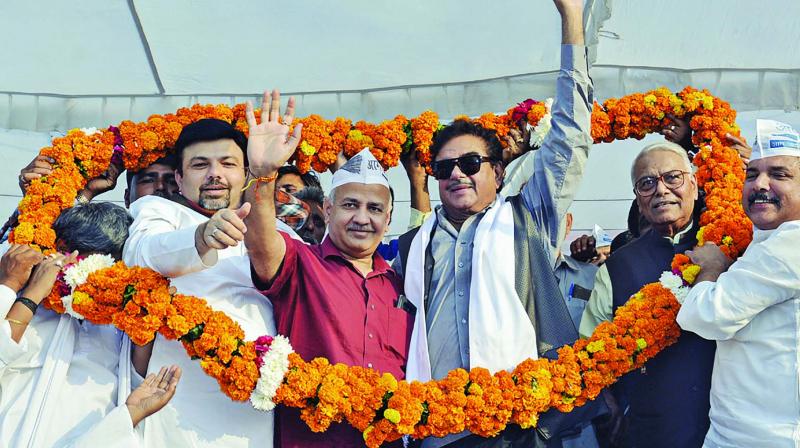 Reports suggest that there are a number of senior BJP leaders including deputy chief minister Sushil Kumar Modi and a senior minister Nand Kishore Yadav who are likely to be considered as contestants for the constituency.

Patna: Amid reports of simmering discontent within NDA over seat-sharing issues, the BJP has started looking for a suitable candidate to contest from Patna Sahib parliamentary constituency.

The seat is currently being represented by film-star-turned-politician Shatrughan Sinha whose tense relationship with BJP leadership is no secret. Reports suggest that there are a number of senior BJP leaders including deputy chief minister Sushil Kumar Modi and a senior minister Nand Kishore Yadav who are likely to be considered to contest from the constituency.

BJP sources said, “The hunt for a suitable candidate is on. A final decision on the issue is likely to be taken at the time of seat adjustments with allies”.

However, Shatrughan Sinha has so far kept everyone guessing about his next political move. There is a buzz that he may join hands with RJD and seek ticket from his sitting constituency.

On Tuesday, Shatrughan Sinha raised many eyebrows by accompanying Bihar’s Opposition leader Tejashwi Yadav to Durga Puja pandals and offered prayers with him.

After offering prayers at one of the pandals, he put tilak on Tejashwi Yadav’s forehead and said, “I have blessed him and also done his rajyabhishek. He has the capability and I see him as the future of Bihar”.

He further said that “I am not sure of the acche din but I can say that subh din is about to begin”.

According to RJD insiders, Tejashwi Yadav has been desperately trying to convince disgruntled NDA leaders to switch sides in order to expand his party’s vote base in Bihar. Recently, he had invited RLSP Chief Upendra Kushwaha to join RJD led Mahagathbandhan in Bihar.

Political analysts are of the opinion that after wresting Jokihat assembly seat from the JD (U), an upbeat Tejashwi Yadav has been trying to expand the ambit of the grand secular alliance in Bihar. Tejashwi Yadav is also aware that Shatrughan Sinha is not only popular in his own constituency but also enjoys support from the Kayastha community.

“It won’t be easy for the RJD to give him a ticket without consulting other allies because Patna Sahib constituency has always been contested by the Congress party,” political observers said.

They, however, also said that “Congress party has been in support of roping in NDA leaders to strengthen Mahagathbandhan in Bihar ahead of 2019 general elections. Tejashwi Yadav may convince the Congress party to field Shatrughan Sinha as a joint candidate from Patna Sahib”.

Shatrughan Sinha has been critical of Modi government and the BJP leadership since 2015 Bihar Assembly elections. He opposed demonetisation and GST rollout - two major decisions of the Modi government in 2016 and 2017.

He has also been vocal about his support to RJD chief Lalu Yadav despite corruption cases against him and his conviction in fodder scam. It didn’t go down well with the BJP leadership. The two-time Lok Sabha MP from Patna Sahib has also openly praised Congress president Rahul Gandhi on a number of occasions earlier.

Political observers say that the BJP leadership took a decision to sideline Shatrughan Sinha after he teamed up with two dissident leaders, Yashwant Sinha and Arun Shourie, in April this year.

Shatrughan Sinha served as a Union Minister in Atal Behari Vajpayee government between 2003-2004. He was appointed as the head of the art and culture department of the party in 2006.